We were back at the Foreigners’ Office again this afternoon.  Our bag-on-wheels was filled with our passports; our visas; and every single piece of paper (in duplicate, triplicate, or quadruplicate) we have filled out, signed, had translated, notarized or apostiled, and then stamped by the Los Angeles Consulate, Customs, or one or two places in Sevilla.  We were told last time that we would only need four items for this visit, but we weren’t taking any chances.

We also brought the form (one of those aforementioned four items) we were given two weeks ago by the Foreigners’ Office.  We went to a nearby bank the other day, paid our 15 euros, and watched as the form was stamped, scanned, and registered.  It was a tremendous relief when the woman at the bank went online to look us up using our NIEs (Numero de Identidad de Extranjeros, our Foreign Identity Numbers) and easily found us in the NIE database.  We thought that was a good sign.  We figured we were ready to face La Rubia, Thing 1 or Thing 2 — or even Thing 3 again if we were allowed direct access this time!

Our appointment was during a range of time, from 3:30 to 6:00 this afternoon.  So, we taxied over and got in line at 3:21 and waited for the doors to reopen after siesta, this time fully understanding the check-in process.

We were given our numbers.  They began distributing with ticket #10.  We were 18 and 19.  We sat in the waiting room for less than 10 minutes until our numbers were called.  We then waited in the next room (where Things 2, 3, and 4 worked) for about 3 minutes.  And then we met Thing 2.  He didn’t look up.  He didn’t smile when I said, “buenas tardes,” but he did at least return the greeting.  I gave him our forms that indicated we had appointments and we were there to continue the residency card process.  He didn’t look at me and muttered in Spanish.  Well, what are you here for?  I told him we had appointments to continue the process of obtaining our residency cards.  Without another word, he began taking documents from me.  He only needed four documents (we had been correctly informed and we were overly prepared).  He took two of our new photos and trimmed them to the correct size in a nifty little contraption.  I commented on how much I liked the contraption and we then became friends.  Before I knew it, he was done with my paperwork, handed me a receipt and began to work on Jerry’s.  I joked again about the contraption (telling him how much I love contraptions) and he was then truly my friend.  He showed me Thing 3’s contraption, which was much more contemporary and he complained that his was an antique.  I told him I was an antique, so I liked his better.  He laughed out loud.  He told us we would receive notification (an official appointment letter) within about 25 days when it was time to come pick up our cards. He then bid us both a very warm good-bye.  We were done in about 35 minutes and went to Starbucks to celebrate with Frapucinnos and large pieces of expensive and stale chocolate cake. But we ate it anyway.  Because we were happy.

I had a funny conversation with the lawyer at 11:00 this morning.  It made me appreciate that, although he may not work with our same sense of urgency, the “luz” company (Endesa) is not entirely innocent.  The lawyer said he phoned Endesa yesterday and was told he couldn’t call again until Friday.  This was because on Monday they informed him it could take up to four days for them to get back to the apartment to turn on the lights, and Friday will be four days.  They had committed to turning on the lights no later than Friday, and therefore (he laughed as he said this) they allowed him the right to phone Friday and not before.

But, the truly exciting news is that the lawyer phoned me again at noon while I prepared a draft of this post (before heading over to the Foreigners’ Office).  The man from Endesa will be there for the “luz” Friday afternoon at 4.  Is it possible we will be home this weekend?!?  Let’s hope this light at the end of the tunnel is not just the headlight of an oncoming train! 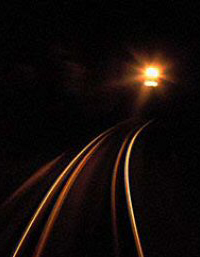 25 thoughts on “Less Strange, Still in the Dark”