I am trying to get back into the habit of working out regularly.  Obviously, it’s great to stay in shape, but it’s also really important for my mental health.  And some days, my mental health can really use some help.  I used to love to work out and I would do it religiously.  Lately, I just can’t seem to find my groove.  A month ago, I took a one-month trial membership at a nearby gym.  It was great and I would return from my workouts energized, but I then I couldn’t get motivated to put on my gym clothes and walk the five minutes to get there.  Since we’ll be traveling in early December, I’ve decided to wait until we return before I make another financial commitment at the gym.  So, I try to exercise at home.  Part of the problem is that I’ve been avoiding committing to any kind of regular schedule for most activities.  I came into this with the attitude that I was retired and I could do whatever I want whenever I want.  It’s a fun concept, but not necessarily a very healthy way to live.  I think it’s time to create some kind of schedule for myself and then stick to it.

STROLLING ON A RIVER
In the meantime, I’m trying to get into the habit of taking a good healthy walk regularly, at a fast clip.  Thursday, I walked along the water.  More than two miles (3.5 km) in less than a half hour, and that included two quick pauses for photos.  The walk was invigorating and I discovered a bit more of the city that I hadn’t yet explored.  I’ll have to build this into my new schedule, as well.

I walked past the Olympic Stadium,which is across the river, actually between two branches of the river (the Canal de Alfonso XIII and the Guadalquivir River), on the island of La Cartuja.  Olympic Stadium from Expo 92 sits on La Cartuja and the Alamillo Bridge takes you there.  The bridge, completed in 1992, is another wonderful opportunity to contrast the old and the new in Sevilla.

It was a glorious afternoon and I saw a crew team out practicing.  Seeing that crew speed by was an inspiration, but I think I’ll stick to walking.  Unlike Tina Turner, since leaving my (good?) job in the city, I usually prefer to take things nice…  and… easy.

I wonder if it’s time for my siesta.

Street musicians are very common here in Sevilla.  I’ve mentioned them in earlier posts.  Some are wonderfully talented and a joy to hear.  Others are pure torture and I’m tempted to pay them if only they’ll stop.  One day last week, I heard the tune “Strangers in the Night” being played fairly decently outside our windows.  Musicians making their rounds regularly stop in front of Dos de Mayo to perform for tips for the four restaurants/bars on our plaza.

Last Saturday afternoon, I heard an energized flamenco beat being carried by some sort of drum and clapping hands.  When I went out on the balcony, I found one man playing a guitar and singing while another drummed on a large box.  A baby in a carriage was mesmerized, and people around them clapped skillfully to the beat.  It was uplifting. At the end, no hat was passed; no money was exchanged.  They just hugged and headed on their way.

As we neared the plaza on our walk home from dinner late last night, we heard a joyful noise.  Many voices were raised in song.  They sounded great despite the fact that we groaned when we realized they were singing “Cielito Lindo.” However, as we turned the corner, we discovered the crowd was being led by a group of traditionally garbed troubadours.  And, thankfully, the troop’s next and last song, which they sang alone, was something much more fun — and less familiar to us — than “Cielito Lindo.”

We were so grateful to have arrived home before they made their musical exit.  I hope the video I caught of that last number — right at our front door — will give you a sense of the happiness we felt as we headed upstairs for the night.

It was a busy Friday night in Sevilla.  Lots of people.  Lots of cars competing for very few spaces.  Smart Cars are ideally designed for these streets.  They look to me like half a car and, since many of our streets are the width of half a normal street, and the parking spaces that result are about the same, Smart Car owners have a distinct advantage.  As we passed the Plaza de San Lorenzo tonight on our way to dinner at the Alameda de Hercules, we got a new lesson in parking Sevillano style.  The spot was too small even for a Smart Car, so the driver was creative. 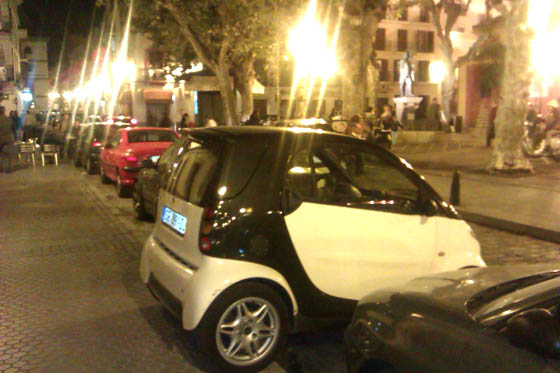 I just pulled out an old sketchbook and discovered some drawings that brought back memories.  The memories that come back when I look at my old drawings are often more vivid than those that are awakened by looking at old photographs.  I think it’s the fact that I was completely engaged in the action at the time and spent more than a moment snapping a photo or awkwardly posing for posterity.

When I was 25, I landed a job in Medical Illustration at Downstate Medical Center in Brooklyn, New York.  I drew kidneys and muscle tissue.  I traced cross-sections of cadavers that had been cast in polyurethane.  I created art and typography for slides that were used by the medical school.  It was fun work and was what began my career in publications and communications.  At the time, I never went anywhere without a sketch book.  I would sketch unselfconsciously, and had been doing so for years. I doodled my way around Italy in the ’70s and gave away almost all the sketches as “thank you” gifts for the hospitality I received there.  I wish I had had a scanner!

While working at Downstate, I drove up to Boston, just 4-1/2 hours away for a weekend visit with an old college friend, Mary.  I fell in love with Boston and immediately decided I had to move there.  I left  Downstate four months later after only 1-1/2 years for a job as a typesetter and graphic artist in a small, quirky (aka, cripplingly dysfunctional) studio in Cambridge, ironically named “Together Graphics.” The job in Cambridge paid a lot better, but was not as interesting nor did it offer the same opportunities for professional development and personal growth as the job in Brooklyn.  But it did get me to Boston, which is where I met Jerry a little over a year later.

For my first month in Boston, while I looked for my own place, I stayed in a basement apartment on Gray Street in the South End with Brian, a friend I met through Mary.  He was to become my best friend over the years and was my first good gay friend.  I was still living the life of a straight person, thinking I could ignore who I really was and wanted to be.  As a good friend (and someone with “gaydar”), Brian clearly knew the truth, but he never let on and he let me come to terms at my own pace. I spent a month on his couch and many afternoons hanging out at Mary’s apartment with my sketchbook, sketching the room, the house plants, and, as shown here, bananas that happened to be left on the coffee table. Jerry and I had already moved twice by the time Brian and Mary decided to move together to Maui.  I lost touch with Mary, who met someone in Maui, married, and was living in Missouri the last I heard.  After a few years, Brian (who was a serial monogamist) had also met someone.  They moved to San Diego and stayed together about a year.  Brian remained in San Diego.  So, I was elated when Jerry and I had the opportunity in late 1992 to move to San Diego, as well.  But, just before we left Connecticut for San Diego, Brian went back to his parents’ home in Massachusetts, where he died at the age of 37 of complications from AIDS.

I think it’s time to start sketching again.  It’s very therapeutic and I like the depth of the memories.

Back in August, on one of our various trips to IKEA, we had a wonderful taxi driver who, as we rode on the boulevard alongside the river, pointed to a kiosk at the start of one of the bridges into Triana and said in Spanish, “They have the best churros and chocolate in Sevilla.” The place was called “Los Especiales.”

We have had churros in San Diego and in Mexico.  To me, they’re nothing more than a long donut stick.  I’m not a huge fan of donuts in the first place (with or without preservatives).  But, I am an enormous fan of chocolate.

On my sister’s birthday in September, Jerry and I were out for a walk and decided to honor Dale, who would never have passed up any opportunity for junk food, by trying churros and chocolate.  We stopped at a neighborhood café. We really had no idea what to expect of the chocolate.  What was delivered to the table came in mugs and looked like what we know as hot chocolate (or cocoa)  The churros were large and broken into long pieces having been originally made in a large spiral (Spanish style).  They were phenomenally greasy.  The chocolate was too thick to drink but not quite thick enough for dunking, which Jerry said was what one was supposed to do with churros and chocolate.  None of this stopped us from consuming the entire platter and the two mugs of syrupy hot chocolate.  It left us with indigestion, heartburn, and the sense that we hadn’t yet truly experienced Spanish churros and chocolate.

Fast forward to yesterday evening.  I suggested we go for a walk in the afternoon, and Jerry suggested we walk over to Los Especiales as suggested by the taxi driver.  On the way, we heard rhythmic drumming that sounded like there was a procession nearby.  We were just a block away from the Church of the Magdalena, so we headed into the crowd, following the smell of incense.  The drumming grew louder and the smoke heavier until we reached a truly stunning paso.  It was either another saint’s day or the people of Sevilla had organized a parade to escort us to the churro stand. I choose to believe the latter.

We caught up with the paso, watched it turn up a small street, and we then continued on our own the last two blocks to the river. Now, I don’t know if this really is the best churros and chocolate in Sevilla, and I am certainly not going to make it my life’s work to find out.  Suffice it to say that the churros and chocolate were so good that there is no need to look elsewhere.

On the way, I learned something.  Jerry can still move a lot faster than I can.  I have been dragging him around Sevilla for four months.  Often, I actually stop and wait for him to catch up.  But, last night, when he caught sight of the churros kiosk and thought it might be closing early, I had to run to keep up with him.