It just doesn’t always connect with his mouth.

We got to Peet’s a bit late Tuesday morning, as if we were back in Sevilla; it was almost noon when we finally arrived for our morning coffee.  While we were there we were joking with two of our favorite baristas, Breezy and Natalie, about Jerryisms.  And that reminded me of one from a few years back.

When we  made our move in the late ’90s from San Diego to San Francisco, we decided to take a leisurely drive up the coast instead of stuffing ourselves onto a plane.  We boarded the cats with a service that would fly them up to San Francisco once we arrived.  We felt a little guilty, but decided it would be a much more pleasant drive without two stressed-out cats yowling incessantly from the back seat.  We spent two nights on the road — for what should have been a one-day drive.  Our first night was spent 3-1/2 hours up the coast in Santa Barbara.

While we were getting ready for bed that night, Jerry intoned:

“Kitties, I’m communicating with you telepathetically.”

I have spent many hours in recent days numbering and cataloging our music CD collection.  I know all the music should just be moved to my iPod, but it takes a long time to transfer all that music.  Out of a total of 360 CDs (after setting aside more than 50 for my next trip to Goodwill), I have only 63 on my iPod.

So, the CDs are all numbered, listed on a spreadsheet with their corresponding genre, and placed in vinyl sleeves (8 CDs to a sheet).

All I have left to do is buy binders for the CD pages; two or three should do.  The binders will be packed in a box and shipped to Spain (except for a travel pack we’ll take with us on our road trip to South Dakota).  Once we’re in Spain, I’ll have to figure out what to do with them all.  We currently have a 5-foot-tall, swiveling CD tower; I don’t want to haul that around the world — or have it take up space wherever we settle.  Maybe I’ll just put the binders on a bookshelf.

And, yes, Jerry, I understand from past experience when I first organized the CDs on the 5-foot-tall, swiveling CD tower all those years ago that some of my music classifications (my so-called genres) are confusing to you.  That’s why you can also sort the spreadsheet alphabetically or search any keyword.  And, of course, you can continue to do what you always do: Pretend there’s no order whatsoever and hunt.  (Just like the cookbooks and the spices.) 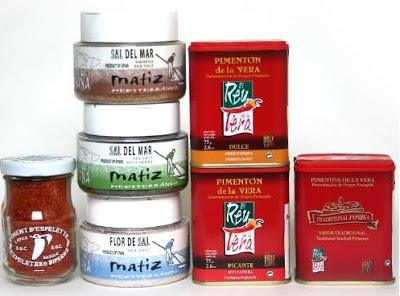 Speaking of spices… when we get to Spain, should I alphabetize the spices by their English or their Spanish names?

We always had shelf upon shelf of books in no particular order.  In San Diego in the ’90s, we had a library off our kitchen.  The cookbooks sat on their own several shelves (because when I unpacked, I put them there).  Any time Jerry wanted a recipe, he would search the shelves of randomly placed cookbooks to find the one he needed.

One day, I had the brilliant idea to organize the cookbooks so Jerry’s culinary life and my aesthetic life would be that much more pleasant.  While Jerry was out, I spent a couple of hours alphabetizing the cookbooks.  I was so happy with the results — order out of chaos — that I decided to do the same with our mess of spices in one of the kitchen cabinets.  When I finished (and it didn’t take long at all), the spices were in alphabetical order on stepped shelving and two-tiered turntables (which, oddly, I always had on hand and which should tell you something about my personality), easily visible, easily reachable, and exactly where they were supposed to be.  I couldn’t wait for Jerry to get home.

When Jerry walked in the door, I pointed at the bookshelves and announced, “Look what I did!”

“I alphabetized the cookbooks!”

He sputtered.  “Well, using what system?”

“Where did you put the Sunset ground beef cookbook?”

“Well, did you put it under Sunset or Ground.  Or is it under Beef?  How am I supposed to find anything?”

“I also alphabetized the spices,” I commented as I walked into the kitchen.

“But…  What system did you use?  Is black pepper under Pepper?  Is it under Black?  What about red pepper?  Or Spanish Paprika?  Is Ground Cumin under Cumin or is it under Ground?”

“Jerry, tell me, what system do YOU use for organizing the spices and the cookbooks?”

“OK, then, just pretend everything is still a complete mess and keep searching.”

I felt very clever.  Unfortunately, the problem with my plan was that it required Jerry to always put the cookbooks and spices back where he found them.  Oh, well.

Jerry has a brilliant mind…
It just doesn’t always connect with his mouth.

We thought we had made some major progress yesterday resolving a challenging item on our to-do list only to discover an hour later that what we thought would work would not.

When Jerry realized the sad truth, he announced…

“I feel like we’re back to square zero.”
Jerry has a brilliant mind…
It just doesn’t always connect with his mouth.

“Flow with the punches.”