San Geraldo is trying, without much success, to remember the Spanish names for silverware.

Fork is tenedor. Knife is cuchillo. Spoon is cuchara.

Some time last week, His Saintliness said he was frustrated with how difficult it was for him to remember those three simple words.

I said that I had had the same problem. So, I found a little trick. “A fork has tines and that helped me remember tenedor (ten is similar to tyne).

“For cuchillo, I simply pictured two vertical knives in place of the two “els” in the word.

I continued, “The only word left was cuchara, which meant that was a spoon.”

San Geraldo loved my method and immediately put it into practice. But, Monday, while we walked home from an appointment, he told me he still finds himself mixing up the words.

“No,” I responded, “cuchillo is knife. You think of the two ‘els’ as two knives. Tenedor is fork because ‘ten’ is similar to ‘tine’.”

As we walked he continued to muddle the memory aids. And he kept repeating the incorrect versions to show me how he was confusing them.

I finally told him it would probably help if he stopped repeating them incorrectly, “over and over and over again.” Maybe he should consider saying them aloud the correct way.

He tried to explain to me why that was so difficult for him to do now, finally saying, “Well, you know how I am.”

I said, “Yeah. Pig-headed…” He then tried translating that into Spanish. (Don’t ask.)

Along the way, we decided to stop and say “hi” to Tynan. San Geraldo, of course, immediately told him about our conversation. 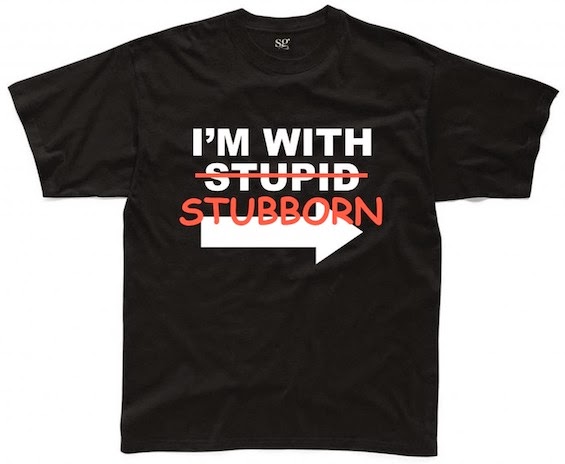 We said our good-byes and, as we walked off, San Geraldo laughed again and said, “I can’t believe Tynan called me ‘stupid’.”

I said, “He didn’t call you stupid. He said you were stubborn.”

“He did not! He said stupid,” he argued… stubbornly.

So, tolerantly and in my version of a Chesterfield accent, I explained, “He said stew-buhn.”