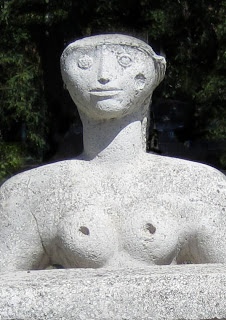 I’m in the process of renewal but I’m not completely there yet. More specifically, San Geraldo and I made some progress this morning on our residency card renewals. It wasn’t without its chuckles, grumbles, and mystification.

Before I tell you about that, however, I want to share a photo of what I found to be a charming sculpture in Los Remedios. The sculpture is called “Muchachas al Sol” (“Girls in the Sun”). It was completed in 1963 and was the first modern monument erected in Sevilla.

Antonio Cano, a sculptor originally from Granada, was hired to design the piece for the neighborhood across the river from the Cigar Factory, but it wasn’t very well received by conservatives, which included many art critics, and protests were held to keep it from being so openly displayed. Puritans? It wound up being shuttled around the city for years, spending some time hidden in the trees of Maria Luisa Park, before finally being installed in 1981 in Los Remedios. The girls are sitting in the sun drying tobacco leaves. I don’t know if the real “cigar women” actually performed this task topless, but they were known for being a bit, well let’s just say, morally relaxed. Remember “Carmen”? In any case, these two certainly look relaxed and refreshed. The only ones in our house looking relaxed and refreshed right now are the cats.

$#%*@#’ FOREIGNERS (THAT’S US)
As I started to tell you above, San Geraldo and I returned to the Foreigners Office this morning. We got up before 8. By 9 we were at the Plaza de España with everything we thought we’d need (and more) to submit the second round of documents for our residency card renewals. There was a very short line inside. We received our numbers and were called within a few minutes. This time, we were sent into a large office that last year was dedicated to work visas and the like. I was confused, but went where we were called. A very nice young guy sat at a desk. He laughed when he saw our passports and our multiple stacks of papers. He said, “Why do Americans always bring so many copies? We only need one.” I told him that when we submitted our original visa paperwork in Los Angeles, we were told to bring two copies of each item, only to discover when we were there that we needed three or four of certain items. Fortunately we had been warned about this and San Geraldo had come prepared with extras, just in case. We now take no chances.

The nice bureaucrat took our papers and immediately said, “Uh oh.” The first of the three requirements in the letter we had received was a complete copy of our passports. We didn’t give this any thought. We (San Geraldo) have copied the insides of our passports several times now. No problem. Well, yes, problem. This time they really did want a complete copy — every single page, including all the blanks. I snuck a peek to my left at San Geraldo (because I could feel steam coming from that direction). He looked like he could blow a gasket at any moment. Fortunately, the guy behind the desk was very pleasant. He told us we should just go get the copies and come right back. We wouldn’t have to wait when we returned. I asked if he knew where the nearest copy shop was. Oh, it was nearby. “Just the other side of the park.” Hmmm. I asked, “On Calle Menendez Pelayo?” He said, “Yes.”

San Geraldo and I had copies done there when we were staying at the hotel last year. Trust me, it’s not really nearby. It’s a big park. At a brisk pace, it would take more than 15 minutes, which meant we had probably 40 minutes of walking roundtrip, plus waiting for the copies (and the store seemed to always have a backlog). I didn’t tell that to San Geraldo until we got outside. I suggested we take a cab. He said he was willing to walk. I said, we could start walking and then see what he thought. But we’d definitely take a cab back. Then, shocker, the newsstand immediately across the street from the Plaza de España had a sandwich sign that said “We do PHOTOCOPIES”… in Spanish and English (the sign that is; obviously the photocopies come out in whatever language they start in). We walked up and told the guy inside the kiosk that he was our savior. He laughed. If he was Catholic (which is fairly likely), he didn’t appear to be offended. Thank god! Oops. Well, never mind.

We left a few minutes later with our copies, and didn’t wait more than a moment before seeing our friendly bureaucrat again. Everything was in order. The next step? In about a month (more or less), we will receive a letter to return to the office to pick up another document to take to the bank so we can pay another small fee. Then, we return again to the Foreigners Office with that stamped form, our passports, and new photos. Then they will process everything. About a month after that (more or less), we will return to the Foreigners Office to pick up our new cards.

Geez, as they say in South Dakota. Geez, as they say in New York. (Can you hear the difference?) We began the renewal process in early June. Our old cards expired mid-July. We should have our new cards some time in November — more or less. If San Geraldo wants or needs to leave the country any time before then, he’ll have to go through the process I recently went through (and wrote about) to obtain a “return authorization.” I’m hoping we’ll have our new cards before my authorization expires in November. We should have our new two-year cards just in time to start the renewal process for the next two-year cards (OK, I exaggerate). After that it supposedly gets easier. As they say in Spanish, “Ja!” (Which sounds the same in English, “Ha!”)

Oh, do me a favor. Please don’t ask San Geraldo how he’s feeling about any of this.

34 thoughts on “Not Feeling Completely Renewed”