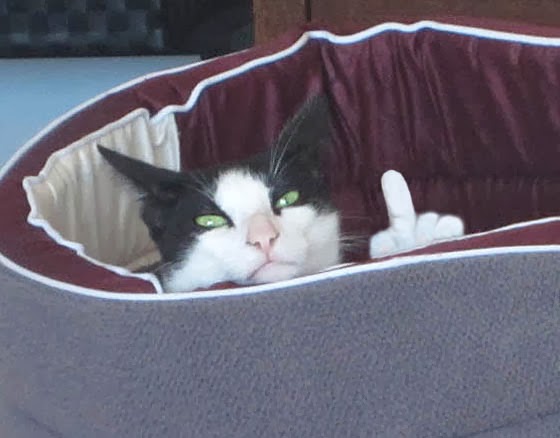 “Dudo caught a bird on the terrace! He’s on my rug! I can’t get it out of his mouth.”

What the hell could San Geraldo be thinking?!? He wants me to do something about a cat with a bird in his mouth? My mother is the frickin’ Dowager Duchess! (Sorry, Mom, but that’s how it ran through my head.)

I grab an old hand towel from the laundry room and head to San Geraldo’s bedroom. Dudo runs out between my legs — bird in mouth. I try to grab him and he growls at me before running under the dining room table. He actually growls at me!

Dudo then runs back into San Geraldo’s room. I follow. He jumps up on the bed, where he crouches facing me — bird still in mouth.

I tap on the bed directly in front of him and command, “Dudo, drop the bird!”

He does. I wasn’t expecting that!

The bird is very clearly dead. I quickly grab it up in the towel. San Geraldo is ready with a plastic bag. I shove both towel and bird in bag. Then I go all over the house with spray cleaner and paper towels and pick up bird feathers. Dudo follows along faithfully — at first, licking his chops!. He’s beside himself with joy. I have a hard time looking at him for the rest of the night.

I thought Dudo would be angry with me, but he’s even more attentive now. Maybe he sees me as his accomplice. Maybe he thinks he caught the bird and I ate it.

He woke me this morning at 7:00 to play with him. He brought strings (formerly mice) onto the bed and we played for a half hour. I usually don’t give into him like that, but now that I know he’s a cold-blooded killer, I’m thinking it might be better to do what he says. Also, I figure as long as we play with fake prey, he won’t be out catching the real thing. But maybe I’m just helping him perfect his murderous skills.

(Truth be told, Dudo is right now sound asleep on my lap. I know he was only doing what comes naturally. I suppose I should be honored. After all, he did finally share his catch with me. Maybe he just knew sparrow wouldn’t be on San Geraldo’s diet.)