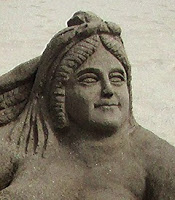 The Greek sand clan of the god Chronos has grown since he was first introduced (click here). One day last week, I saw sculptor Ivo working on a zaftig female figure (in sand). The very next day some other characters appeared. I learned that the female figure was none other than the goddess Aphrodite.

Ivo told me he was about to add a lute-playing cherub in an empty space. So, Friday, I headed back to see what had developed. While putting the finishing touches on the cherub, Ivo said he now plans to add the god Ares. Already lolling with Chronos, Aphrodite, and the musical cherub are a winged cherub, the god Pan, and the devil, whose right hand is comfortably planted on Aphrodite’s wrist. That is why, Ivo explained, the devil has a little smile on his face.


In Roman mythology, Aphrodite would be your Venus, your fire, at your desire…

The first time I heard this song, I thought they were singing, “I’m your penis. I’m your fire.”