Jerry and I have been to Restaurante Carmela in the plaza of Santa Maria La Blanca between five and six nights per week during the past five weeks.  It’s not that we enjoy eating out three meals a day (although we have been known to do so at times even back in California); it’s just that we don’t have a home yet in which to eat.  I have fantasies of enjoying my first breakfast at home Tuesday morning.  We’ll see if that actually happens.  At least dinner at Carmela is consistently good. We usually get tapas portions and enjoy a little feast.  Oh, and have I mentioned the mojitos? Yes, I suppose I have.

The plaza is large and airy, and the breezes are usually refreshing even on the hottest of nights.  Yesterday and today were both over 41 degrees (that’s 106F).  Last night, when we had dinner at 10:00, it was still 38 (over 101F).  Whatever breeze existed, and there wasn’t much, was in the plaza of Santa Maria La Blanca.  We were grateful for it.  Sunday through Wednesday is supposed to be 29–33 degrees (84–93F); we might need our sweaters.

We have been getting to know the servers at Carmela.  We know so far that two are studying at the University of Sevilla.  One is avidly pursuing the English language; another is studying law after puttering around in liberal arts for two years.  Another server is clearly in love; you can see it on her face when “he” stops by for a visit.  And then there’s the one who worked double shifts leading up to her vacation at the beach this week with her husband; it’s their first wedding anniversary.

It’s nice to have someplace familiar, comfortable, and welcoming to visit every night. They make us feel like we’re home, even though we are still not home.  They joke with us about our “luz.” They all gave us warm anniversary wishes.  And they teach us a new Spanish word here and there, and laugh at some of the things we say.

Before arriving in Spain, I knew that “cajones” meant “drawers”; “cajas” meant “boxes”; and “cojones” were “balls” (the ones usually found on the male anatomy, not the kind you play with… well, never mind). Last week, while I was telling one of the servers our IKEA saga — that the apartment was filled with furniture, but it was all in boxes — I got my words mixed up.  I’m sure I don’t have to tell you what I told her we had all over the house.  There was quite a bit of laughter around the service bar for the remainder of the night.

JUST DESSERTS
After dinner, we always stop just outside the plaza on a little street called Puerta de la Carne (“Meat Gate”) for freshly made ice cream.  There are multiple ice cream shops, but Heladería Villar is our favorite.  They serve a huge variety of flavors, freshly made. And the owners and the one staff person are as friendly and charming as they can be.  Jerry has Belgian chocolate — every night.  He broke with tradition once, accidentally, and will not do so again.  I try to vary.  The last two nights, I’ve had half Belgian chocolate and half mango.

They have the best pistachio and there’s a date ice cream that is so natural it tastes like you’re eating fresh dates, which in my opinion is not a very refreshing ice cream flavor.  Amazingly, we have both lost weight since being here.  Although we’re indulging, we’re not eating large portions.  And I suppose it’s also partly because we (well, I, mostly) walk miles every day.  The heat certainly encourages the burning of excess calories.

ANYTHING FOR A BUCK… OR A EURO
I probably should also mention the various and sundry “annoyers” and street entertainers we see every night.  There’s the extremely pushy and unpleasant shoeshine guy.  He looks like a pervert, just about crawling under tables to blatantly ogle everyone’s feet.  Jerry’s sneakers and my sandals are, thankfully, always a huge disappointment and he quickly moves on. When Carmela was in town (I assume she’s at the beach now), she would make him leave.  He never did so quietly. 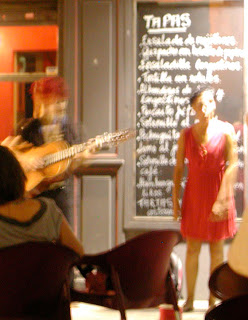 As for music, there’s the very shrill flutaphone player who has not added to her dismal repertoire in five weeks; but, come to think of it, that’s probably a good thing.  Another, a recorder player, performs while on roller blades and is training his very devoted dog to not bark incessantly while he plays.  He’s actually good and plays some Simon & Garfunkel, which makes me happy — as long as the dog behaves.  Then there’s the very well-dressed but not very talented accordion player who performs “Cielito Lindo” — every night.  It was bad enough when the long-suffering mariachis in Old Town San Diego and Tijuana received incessant requests for that song from the tourists. How many times can a performer take requests for “Cielito Lindo” without going bonkers? But no one is asking this guy for “Cielito Lindo.”  Should I pay him (and the flutaphone player) to stop?

We don’t tip them all and we don’t tip every night.  And, even though some are talented, hearing the same musicians perform the same tunes every night for five weeks does get old.  So, I was really happy to see a new duo arrive Friday night.  These two young women — one androgynous, who made a statement with a huge pompadour of flaming red hair — and the other, barefoot and in a chic little dress, were a really pleasant surprise.  The redhead strummed simply on the guitar while the chic one sang in French.  The singer does Edith Piaf and does her well.  Her voice was powerful, pure, and beautiful to hear.  They performed one number and received applause (which doesn’t happen) and then, appearing embarrassed, passed the hat (well, walked around with a tiny cardboard box) before moving on to the next restaurant in the plaza; unlike the accordion and the wandering flutes, their sound can’t carry over as much area at one time.  The song they performed next door was even more beautiful.  They were back tonight and even better.  They received even more applause everywhere they went.  And they were much more comfortable, and very successful, passing the hat.

So now I don’t just look forward to going back to Carmela and Heladería Villar, I also look forward to the possibility of some new and good music.  Oh, yeah, and the mojitos. 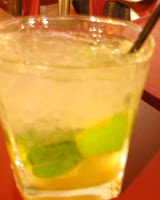