The Romería de El Rocío has begun. Pilgrims are traveling from all over Spain (and Europe) to meet in the little town of Rocío at the Hermitage of El Rocío. It’s about 78 km (47 miles) southwest of Sevilla. I was up at 7:30 (gasp) to see everyone off, but mostly to take pictures and witness the departure. It took me about 10 minutes to walk from our house and cross the bridge into Triana; let’s call it my pilgrimage.

The group from Sevilla set off from Triana around 10:00 this morning, Wednesday. They are expected to have all arrived in Rocío by midnight Saturday. Pilgrims walk; drive; ride horseback; ride in carts pulled by oxen, mules, tractors… you name it. Each procession is led by a paso carrying an emblem of the Immaculate Conception.

Just about everyone I saw wore a medallion of the Virgin. Some were simple, some were grand. Some were new and some had been handed down for generations. The procession began on Triana’s large pedestrian street Calle San Jacinto, but soon turned left into the narrow Calle San Jorge and continued around the bend onto Calle de Castilla passing the Callejon de la Inquisición on its way.  The street quickly became clogged with pilgrims and onlookers. It was a claustrophobe’s nightmare. (I’m glad San Geraldo wasn’t there.)

The paso stopped for about 15 minutes in front of the historic church (built between 1697 and 1702), Iglesia de Nuestra Señora de la O (I  have absolutely no idea what “the O” is and I can only imagine where some readers’ minds will go), on Calle de Castilla, where it was blessed with flower petals thrown from church balconies. Tribute songs were sung, a cheer was led, and then the procession got into full swing.

I was trapped in the crowd during the musical/floral interlude and I was grateful to be tall enough to be able to reach my arms above the heads of the people around me so I could take pictures. The motorized vehicles all waited on the edge of Triana for the paso, the marchers, the horses, and the ox carts to reach them. Then, everyone took off.

Alex waited with the car. Albert, Lola, and some family and friends walked with the crowds until they reached him. Then, everyone but Lola drove off. Lola will not get back in the car until Saturday! The back of the car was filled with food and drink, so Lola will be well-fed and hydrated for her 78-km walk. 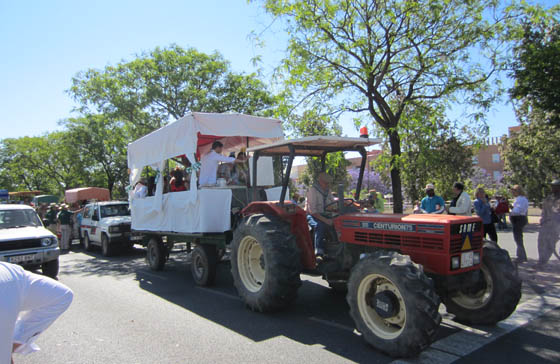 19 thoughts on “The Virgin of Rocío”