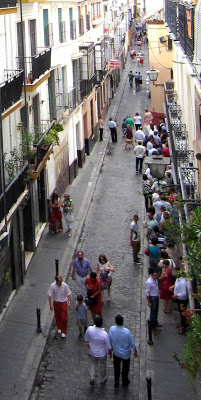 OK. I do know that today, according to the Catholic Church is the “Day of the Assumption of the Blessed Virgin Mary into Heaven.” I apologize for being irreverent. But, it sounded odd to me when a neighbor mentioned that today was “The Virgin’s Assumption.” I immediately thought — but fortunately didn’t say it out loud — ‘What did she assume? It must have been something important for there to be a holiday.’

Yes, it’s a holiday. Frutas Faustino is closed, as is just about everything else in the neighborhood. But the churches are open. And around the corner, the Church of Santa Rosalía has been open since early morning so the public can view the Virgin. There was a line out onto the street when we got up this morning. Lots of noise and lots of people on our plaza when we went for breakfast.

We saw José at breakfast. His relief sculpture will not be displayed to the public until September. I think it was a combination of not wanting to diminish “Assumption Day” and also to ensure that more people have the opportunity to see it before it’s hidden away in the Cloisters. Most of the population of Sevilla is at the beach for the rest of the month. José, in the meantime, is already at work on another sculpture for the monastery — this one of the Virgin. To go to work, José knocks on a private door in the wall of the monastery. A nun opens the door and formally ushers him into his “studio,” a secret room within the cloisters. The nun locks José in this room where he works quietly amid the antiquities. He sees no one but the nun who takes him in and out of the building.

It was an unusual experience for me when I entered the Church of Santa Rosalía. A small crowd was gathered around a bed festooned with flowers. On the bed was the statue of the Virgin of Rosalía. Many visitors approached the bed, knelt and kissed the hand of the Virgin, immediately after which a woman cleaned the hand with an anti-bacterial wipe. Except for the wipes, it felt like being at a wake, which I guess is what it’s supposed to feel like.

I snapped a few pictures and then continued up the street to the Plaza of San Lorenzo to see if there was anything going on there at either the church of the same name or the chapel of Jesús del Gran Poder (Jesus of the Great Power). Worshippers were seated in both places. At “Gran Poder,” visitors could walk through the back hall behind the statue of Jesus and kiss the base. A staff person stood by with wipes.

Clearly, the Virgin of Santa Rosalía is the big deal today. That’s what José had indicated, as well. I headed back home but not without noticing a kitschy window display in the little grocery along the way.

20 thoughts on “What Did The Virgin Assume?”