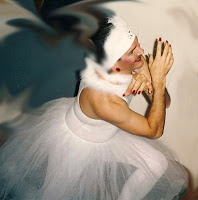 I have been surprised to see Spanish TV ads (not many) for Halloween and also some stores in Sevilla carrying costumes and decorations.  I don’t know if kids actually go around trick-or-treating, but I guess we’d better buy a bag of our favorite candy just in case.  If no one shows up, we’ll just finish it all ourselves (we’ve done it before and, although it’s a hardship, we will do it again if we have to).

When we lived in Connecticut, Jerry and I were invited to a costume-required Halloween party.  Poor Jerry loves costume parties.  I say “Poor Jerry,” because he’s married to someone who does not share his love for costume parties.  I tried — a little — that one time.  I had found a devilish Venetian mask years before and decided to take it off the shelf and build a costume around it.

Jerry is a huge fan (as am I) of the Ballet Trockadero de Monte Carlo, a brilliantly talented and hilarious all-male ballet troupe that dresses in drag and performs and parodies the ballet classics.  We have seen them perform several times.  Inspired by Les Trocks, Jerry decided to go to the party as Olga Chickaboomskya, retired Russian prima ballerina.

One day Jerry left his office at Yale University, wearing a very serious gray suit and very serious silk tie, and headed over to the very serious dance supply store.  He said to the three women who worked there, “OK, you have one hour to make me look like a prima ballerina.”  I’m sure this was a first in 1980s New Haven.  The women immediately loved him.

They started with the tights.  They actually had his size — well close.  The leotard was, amazingly, no problem.  And the largest tulle tutu just fit around his waist.  The ballet slippers were a challenge.  Jerry wore a size 13; the slippers only went up to 12.  But he figured he wasn’t really going to dance and he wouldn’t be on his feet very long, so he would manage.  He finished with a feather boa.

At K-Mart in our little town of Guilford, Jerry found $1 clip-on earrings with giant “rubies.” He bought Lee Press-On Nails.  Jerry has the biggest hands I have ever seen.  The fake nails didn’t completely cover as intended, so he had this odd little colored piece of plastic centered on each of his own nails.  He found a turban and a huge “diamond” broach he could pin to the front.  A friend loaned him a large Russian-looking cape.  When he returned from K-Mart, he tried on the clip-on earrings and one of the clips immediately broke.  He went right back to K-Mart and explained that the earring broke the very first time he put it on.  (The man has no shame.)  They gave him a replacement pair.

The fun truly began (well, and ended) when we got ready for the party.  Our friends Cesar and Daisy, who were not going to the party, came over.  Daisy was our designated make-up artist.

We set up a stool in the kitchen and Daisy went to work.

Cesar and I stood off to the side.  Daisy worked for a long time.

“Daisy, put more color on his eyes,” we coached.

“Close your eyes,” she ordered as she slapped Jerry on the shoulder.

Jerry did so and we saw vivid, sky blue upper lids.

He did so and we saw no color at all.

She complained, “His eyes are so damned deep-set, you can’t even see the make-up!”

“Spread it outside and above his eye lids,” we instructed. “Make it really obvious.”

“But that would be tacky,” she said… and then burst out laughing at the inanity of that statement.

She slathered on more and more of her expensive make-up — heavy lipstick, a beauty mark, heavy blush.  None of it was really easy to see.  I knew Jerry was a hunk, but I had never appreciated how heavily masculine his features were.  There was nothing pretty about him (well, except that the blue eye shadow really brought out his sky-blue eyes).

But he stood, posed, and the vision was complete.

I was so uncomfortable being in costume that I wouldn’t even drive the 15 minutes into New Haven.  I made Olga get behind the wheel.  He had to shift gears while being careful not to knock off a Lee Press-On nail.  The party was a bit of a bust.  Jerry eventually removed his ballet slippers; it took 10 minutes for his toes to unbend.  He spent much of the remainder of the evening complaining that he couldn’t wait to get out of “these damned panty hose.”

I wished we had stayed home with Cesar and Daisy.  Maybe the whole thing would have been more fun had I had a better attitude.  But I don’t think so.

I am so glad no one has invited us to a costume party this year.