Did you know that “banderas” is Spanish for “flags”?

So, if Antonio Banderas were to Anglicize his name, he would be Anthony Flags.

Not quite so attractive anymore, is he? (Well, OK. Maybe Antonio Banderas, by any other name, would still smell as sweet.)

Red flags (banderas rojas) have been flying along the beach for several days now. The lifeguards hoist the colored flags every morning during season. Green means the sea is calm and safe for swimming. Red means stay out of the water. There’s also yellow (caution) and I think there’s another flag that means conditions are so unsafe lifeguards aren’t even on duty (I’ve never seen that one). The Mediterranean Sea tends to be very calm. When the sea is rough, it still doesn’t look anything like the Atlantic or Pacific Oceans. But looks are deceiving. The riptide and under-toe are surprisingly powerful and unpredictable. I respect those flags and I respect the lifeguards. I’ve been surprised by the number of people in the water on these red-flag days. Life guards had been patrolling the beach but, for some reason (perhaps not wanting to upset the tourists), they hadn’t been doing much policing of the swimmers. Until this afternoon.

San Geraldo was out on the terrace watering plants when we suddenly heard whistles blowing insistently. He looked to the beach and saw lifeguards running from all directions. They dove in and began swimming to what looked like a body sporadically bobbing to the surface. Two of the lifeguards reached the body and they all began to swim back in. Minutes later, an ambulance arrived. A lifeguard on a jet-ski zoomed in and circled the group in the water, and then waved “safe” (like in American baseball) to the EMTs and other lifeguards on the beach. All was well. Apparently, the swimmer didn’t even need medical assistance, just help getting back to shore.

A short time later, I headed down to the beach to enjoy the sun. I figured I could at least put my feet in the water. The same guards who had just risked their lives for someone who didn’t follow the safety rules were back on the beach watching the water. People were allowed to wade, but there was no swimming permitted. Three bozos headed into the water, swam out, and pretended to be drowning. One of those lifeguards returned from her post further down the beach and signaled to the three to get out of the water. The way she handled them was a joy to behold.

Back to Antonio
I think one of the guys was named Antonio, because I’m pretty sure I heard the lifeguard say as he came out of the water, “Antonio, banderas rojas!” 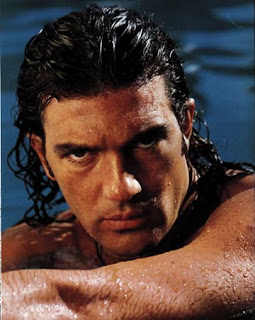