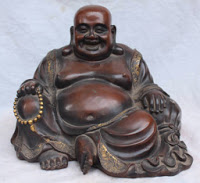 On one of my walks a few weeks ago, I passed a small collection of sand sculptures. Guarding the sculptures was an extremely rotund man sitting in a sturdy beach chair under a large bright beach umbrella.

The works were nice but nothing exceptional and the few coins in the donations box were an indication that I wasn’t alone in my assessment. We shared “holas” and I continued my walk.

I thought, ‘What the artist should do is create a large sculpture of the Laughing Buddha* and then “the guardian” should sit right next to it for pictures. I’ll bet that little cardboard box would be constantly filled.’

Later that day, I told San Geraldo about my Laughing Buddha idea.

Well, Friday, on my way to the doctor, I passed that same spot. There was my rotund friend sitting contentedly next to Laughing Buddha. The artist (click here for an example of his earlier work) must have read my mind. People were lining up to take pictures and the donations box was filled with coins. I would probably take it a step further and dress the guardian in Laughing Buddha’s robes, and give him the traditional prayer beads and cloth sack. Imagine the photo opportunities.

It’s thought that rubbing Laughing Buddha’s belly will bring you wealth, good luck, and prosperity. Rubbing a sand-made Laughing Buddha wouldn’t be very practical. I wonder if they’ve considered belly rubs of the guardian… for an additional fee, of course.

…………..
* Laughing Buddha is not actually “the” Buddha (as I had always thought), but Budai, a 10th-century Chán monk said to be a man of good and loving character. I learn something new every day!

17 thoughts on “Rub His Belly For Good Luck”