San Geraldo is a master when it comes to Sudoku. It’s difficult for him to find a book of Sudoku puzzles challenging enough.

I, on the other hand, love crosswords and have no patience for Sudoku.

During our month in New York, San Geraldo took to doing the New York Times crossword puzzle that arrived (in the paper) every day at my mother’s door. He enjoyed it so much that he has since subscribed to the online puzzle.

Thursday, he printed out copies of Wednesday’s puzzle (the online subscription is a day behind) for us both to work on over our morning coffee. 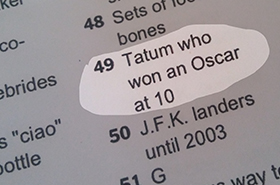 I had completed mine (in record time, although I don’t know what record I’m comparing to), while San Geraldo continued to toil away at his. He’s much better at Sudoku than he is at crosswords and he let me know that he didn’t enjoy watching me scratch away at my puzzle while he stared fixedly at his own.

After a while he asked, “What’s the first name of that actress Tatum?”

I peered at him over my glasses.

“Yeah, that actress Tatum, what’s her first name?” he repeated.

This morning, he printed out the Thursday puzzle for himself and last Sunday’s puzzle for me. He said he didn’t like the pressure.

2 thoughts on “She Got A Name”