San Geraldo has been spending his days doing research. He loves it but it can be exhausting.

I spent 2-1/2 hours in the orthodontist’s chair Tuesday morning. The attachments on my teeth are gone, which means I no longer have to wear my Invisalign braces. Yay. However, I now have metal and wire attached to six bottom teeth and could be wearing that for anywhere from 1 to 3 months. And, given my orthodontist’s track record — 18 to 20 months has turned into 3 years, so far; my 2-1/2-hour appointment Tuesday was supposed to be 40 minutes; she’s never on time; and the metal and wire attached to six teeth was supposed to be attached to four teeth — 1 to 3 months will probably be 6.

By evening my mouth was really sore. We needed our family at Mesón Salvador. And I ate soft food! Here are photos of some of our recent experiences, including Tuesday night.

Sergio’s The Thinker.
Not by Rodin, but still a masterpiece.

With Lolo. He calls me “My Love.” I call him Lolo.

OUR PAL LUKE had a piñata for his third birthday. Kathleen filled it with lots of fun things, including, toys, chocolate, and pop rocks — those colorful bits of candy that sizzle and pop in your mouth. After that came the chocolate dinosaur cake. Sugar rush!

There were little party horns for us all. San Geraldo couldn’t get his to work. He said, “Maybe I just don’t know how to blow.” Ahem. 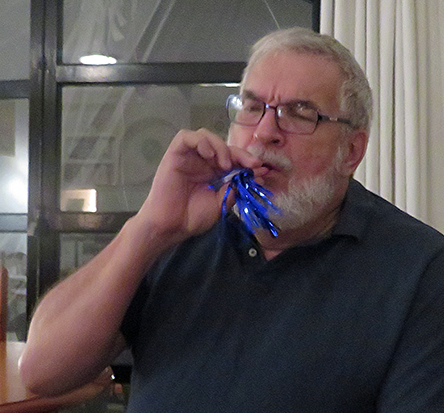 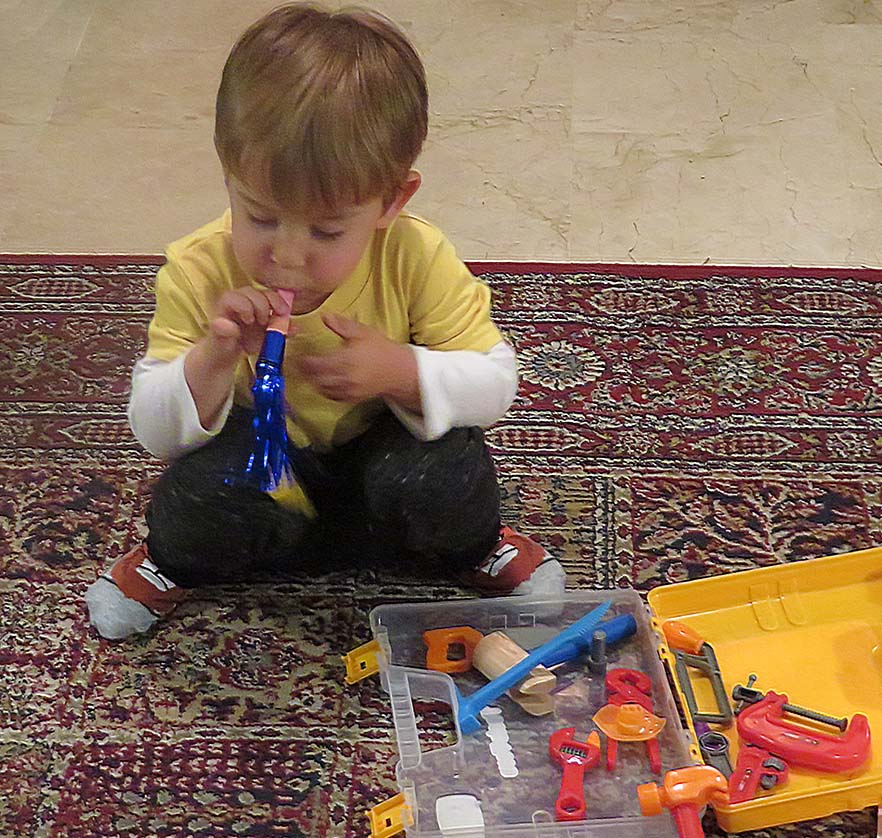 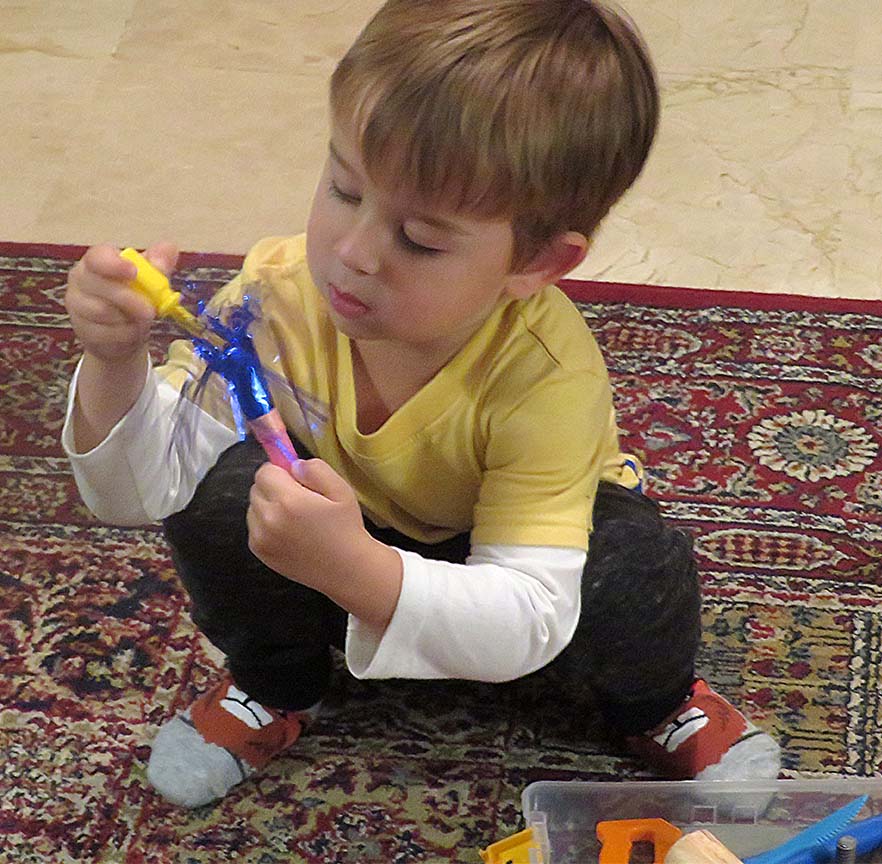 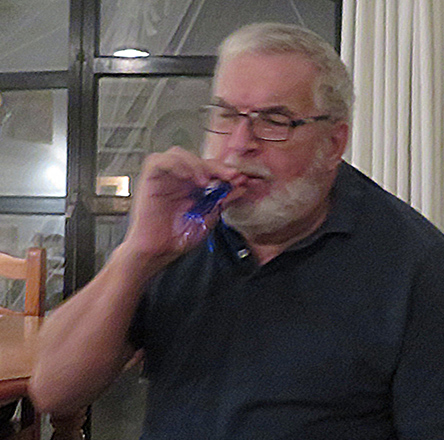 When it comes to living with my clinical depression, mornings are usually my most challenging time. I tend to avoid an afternoon siesta because waking up from one is like experiencing morning all over again.

After a few nights of mediocre sleep this week, I couldn’t avoid a siesta Friday afternoon.

Less than an hour later, I was having another “morning.” As I lay in bed with my eyes closed trying to talk myself into again facing the day, San Geraldo came running in from the terrace.

“I’m sorry to wake you,” he rushed, “But you have to see the rainbow.”

Thanks to San Geraldo, I was able to wake up where the clouds were far behind me.

When all the world is a hopeless jumble…

In the summer of ’82, my parents and The Kid Brother drove up from New York for their one and only visit to us in Boston. We moved, spur of the moment, to Los Angeles a few months later.

San Geraldo thought it would be fun if we all drove to the town of Plymouth (home of Plimoth Plantation and Plymouth Rock) about 45 minutes away. Plimoth Plantation was home to some of the first people to emigrate to America from England on the ship The Mayflower. Four of San Geraldo’s 10-great-grandparents were on that ship.

The “English Village” portion is a living history museum, which means everything is meant to be authentic. The staff stay in character and look and act as if they are living in the period from 1620, the time the settlement was founded, until 1691, when it was abandoned. It’s beautiful and fascinating.

In one reconstructed home, the housewife was preparing dinner. A chicken (or maybe it was a goose) carcass lay on the table surrounded by freshly chopped vegetables and a cloud of flies. The house reeked. Like I said, authentic.

(Click the images. You can almost smell the authenticity.)

There were pigs out back. The stench was awful, so we quickly walked to the other end of town and stopped, at which point My Mother The Dowager Duchess said, “What happened to Jerry?” He was nowhere in sight.

We had only just passed our first anniversary but I already knew him well enough to know exactly where he was.

“I’m sure he’s back there petting the pig,” I said.

So, we walked back through the village. There he was, scratching the biggest sow behind her ear and whispering sweet nothings.

My parents wrinkled their noses, but laughed. The Kid Brother scowled and snapped, “Tell him to wash his hands!”

Today ends Fuengirola’s annual restaurant event called “La Cazuela de la Abuela,” which means “Grandma’s Casserole.” Sixty-three restaurants participated offering their own special tapa-size casserole. All I needed to do was sample five and I could then vote for the best, and get entered in a great prize drawing. Except for sampling Meson Salvador’s entry, we missed the rest of the competition. But it doesn’t really matter because, in my humble opinion, Meson Salvador is always the best at everything anyway.

On the subject of abuelas and casseroles, my paternal grandmother died when I was very young. All I remember was her coaxing me out from behind my mother’s back by giving me candies from a cut glass bowl — raspberry hard candies with liquid centers. I, therefore, loved her.

My maternal grandmother was an amazing cook, but I don’t remember a single casserole.

Beyond the exceptional food and atmosphere, what makes Meson Salvador the best in the world is the staff. They call us “family” and they mean it. After a recent meal, Adrián brought us our complementary chupitos (shots of liquor). They serve “Pionono,” similar to Bailey’s Irish Cream only a whole lot better.

Since San Geraldo rarely drinks alcohol, Adrián brought him something non-alcoholic, a blackberry (mora) beverage. It’s what they serve to children. San Geraldo made a face when he tasted it, so Adrián got a straw and helped him drink it.