In the morning, San Geraldo rushed me downstairs so we wouldn’t miss breakfast in the hotel restaurant. We then went to the British Museum after which I headed off on my own to visit the nearby department store Selfridge’s and walk in the cold and damp to get a closer look at Marble Arch.

When I got back, I had a couple of hours before I had to get ready. I decided to have a siesta. Before I knew it, San Geraldo was saying, “We’d better get moving. We’re going to be late for the show!”

I must have really slept. It felt to me like I had gotten into bed minutes earlier.

We took a taxi, in awful traffic, to The Royal Albert Hall. It was dead quiet outside, but the weather was miserable, so why would anyone linger?

Our door, Number 6, was locked. So, were Numbers 5 and 4. Number 3 was open. Our tickets were scanned and we went inside. The Royal Albert’s “halls” were empty. We headed to our door. There was no one there and it was locked. An usher came up behind us and asked politely, “Are you looking for a bar or restaurant?”

San Geraldo said, “No, we’re trying to get to our seats.”

San Geraldo looked at his watch, “But it’s already 7:30…” was followed by an embarrassed, “Oops! I forgot to change to London time! I’ve been an hour off all day!”

But, it worked out well; the usher suggested we go downstairs to “Berry Bros. & Rudd No.3 Bar.” We had a great meal and relaxed for an hour.

The show was possibly my favorite of all the Cirque du Soleil shows. Seventy percent of the performers were women, which was a joy to see and a very powerful statement given these times we’re living in. 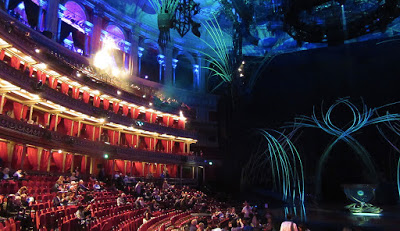 The below video is long, but this is a performance that was also part of the show. Mesmerizing.