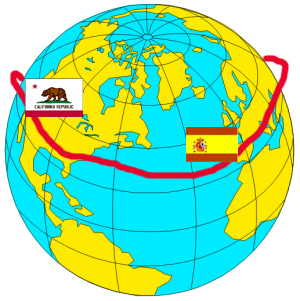 Until I heard Jerry himself answer the oft-repeated question “Why Spain?” during our Thanksgiving visit with family in Eugene, Oregon, I had completely forgotten one important factor in the deeply researched and highly scientific process we used — based on our initial criteria — to determine our relocation options.

After first agreeing that weather was of primary importance, we averaged the approximate latitude of San Diego and Palm Springs (our two favorite climates).  Jerry then spun a globe and marked a line through the areas corresponding to that latitude.  He then listed all the geographic areas encountered by his circle and we then, as you know, narrowed it down to Southern Spain.  A little more precise than just spinning a globe and pointing a finger.

This brilliant process was suggested by the intellectually organized and process-gifted Jerry (who can’t keep his desk — or any surface — clean for more than 15 minutes).  His brain is a wonder.