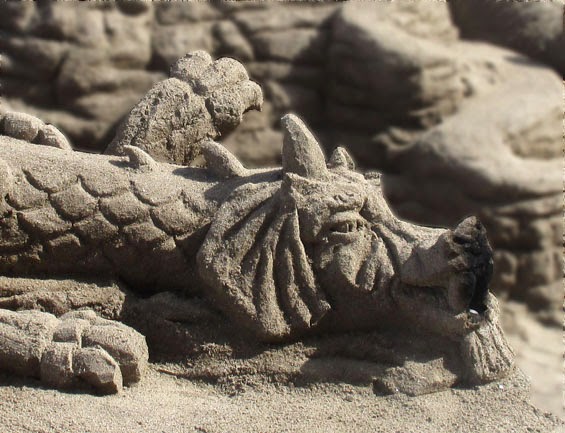 It looks like I won’t be sharing a video or a collection of photos of the half-naked Brazilian male dancers. At least not this year. I never did see them again (after I posted this… click here).

Fortunately, however, sand-sculptor extraordinaire Paul Blane (click for his website) lives not far from where they performed all the time and he took a photo just for me, which I have enhanced a bit to give you a better look.

But first, here’s Paul’s latest sand sculpture. He wasn’t there when I snapped these photos, but it’s a safe bet that’s Saint George (the one who slew the dragon). (Click here for the poem by Alfred Noyes.) Paul Blane’s dragon still ‘gets lit’ regularly (there’s a votive candle in its mouth*).

*Oops! I stand corrected. The fire-breather is not nearly so tame. Per Paul: “I’ve buried a tube in the sand which connects to an aerosol where I sit and so it blows a stream of fire on demand.”


The Half-Naked Brazilian Male Dancers are already as big as they’re going to get.

Share your thoughts and experiences. It's always nice to know I'm not alone. Cancel reply