We left off “Visiting the Family,” with Jerry and his four passengers about to exit Beth David Cemetery in search of Aunt Matilda.

“This much I know, Jerry,” I proudly replied. “Just go left out of the cemetery and cross under the parkway.”
About a mile later, Jerry noticed that we were approaching a fork in the road.
“Which way do I go? Saw Mill Road or Hawthorne?”

“I’m not sure,” I hesitantly responded.

“Aaron, which way do we go here?” Lilly called out.
“Where are we going?” Aaron called back.
“Matilda’s!”
“Matilda?” he thought for a moment and then, “We’re very close.”
“Oy, Aaron. We know we’re close.  How do we get there?”
And after another thoughtful pause he responded, “I don’t know.”
“Oh, it’s very close,” offered my mother.
And Jerry half-sang his response, “We have to make a decision.”
I decided to take control even though I had no idea which road to take. “Just bear right onto Hawthorn.”
As Jerry followed my instructions and headed off to the right on Hawthorn, Aaron quietly sang from the back seat, “You should have taken Sawmill.”
“Now he tells us. Oy, Aaron,” moaned Lilly.
We all just laughed and continued on Hawthorn. After all, we were very close. 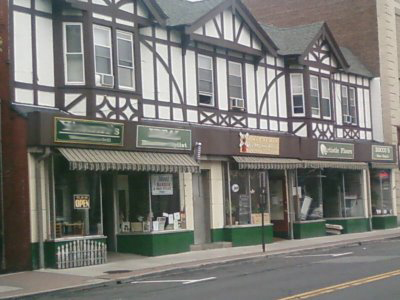 We headed down tree-lined streets, through the little towns of old Long Island. The gnarled old trees formed a canopy above the road, shading the stone and brick Tudor-style, storefronts as we passed through each consecutive village.
“Am I supposed to be turning soon?” Jerry asked.
“I think you just stay on this road. God, this is very familiar.” I was lost and was beginning to feel defeated, “We’re so close.”
Lilly agreed, “We’re very close.”
And my mother contributed, “It’s right near here.”
Jerry had lost all hope, “Well, I have no idea where I’m going. So, I need a bit more help.”
Lilly soothed, “We’re so close. Mimi, look at all the stores along here. It’s so built up.”
Immediately, my optimism returned. Kennedy Airport was fast approaching on our right. Years before, my brother Chucky, my parents, and I all visited Dale and her family, who were living in Germany at the time. We drove to Matilda’s house to leave my father’s car while we were gone. Uncle Paul then gave us a lift to the airport, which was only minutes away. He had taken a shortcut from their house and had come up this exact road.
“There’s the airport on the right,” I almost squealed with excitement, “They’re less than 10 minutes from the airport.”
“No they’re not,” my mother argued.
“Sure they are. Remember when Paul drove us to the airport?”
“Paul never drove us to the airport.”
“Sure he did. When we flew to Amsterdam.”
“No he didn’t.”
“He did, Ma.”
“Are you sure?”
“Yes. And he came in from this side, went in the back way. Remember? The traffic was a mess in the airport and Paul refused to let us off early. Dad kept telling him to let us off and we’d walk, but he insisted on doing the complete circle. Then he rear-ended Barry Manilow’s limo. He got us to the terminal so late that we couldn’t do any duty-free shopping.”
“Oh, that’s right! I had forgotten about that. I was so upset because I couldn’t buy duty-free! And Dale wanted her Chanel Number 5.  She was so disappointed.  What a memory you have. How many years ago was that?”
“I think around 17,” I answered.
My mother continued, “We never did get to see Barry Manilow, though. Anyway, I’m not so sure that was really his limo.”
Lilly laughed, “Mimi, you never told me you ran into Barry Manilow.”
“Literally,” I commented.
“Well, we never saw inside the limo, but the driver said it was him.”
Poor Jerry was exasperated. “I need directions,” he begged.
To our right, and as far as the eye could see, was a chain link fence separating our road from the back of the airport. There were rows of hangars and small buildings containing administrative offices. To our left, street after residential street.
I could confidently say, “You go left somewhere up here,” although I could not confidently say exactly where.
“You know,” admitted Lilly, “I get so fartshadet around here.”
“Here! Go left here,” my mother excitedly commanded. But, when Jerry did as he was told, she was deflated, “Oh, now this doesn’t look right.”
Aaron, who had been silent since our first wrong turn, looked around and agreed, “This isn’t their street.”
To which, Lilly replied, “No, but we’re very close.”
“Here. Turn left here, Jerry,” I ordered.
Jerry turned onto a large tree-lined boulevard.
And my mother agreed, “Oh, this is right. Now we just have to look for those big pillars that lead into their street.”
“Pillars?” I disagreed, “There are no pillars.”
“They’re stone,” she replied. “Or brick. White. Or gray. There! No, that’s not it.”
“Well, I don’t remember pillars. But, we’re definitely close,” I admitted.
“Here! Turn left here.” My mother was once again certain.
“I can’t turn left.” Jerry was becoming resigned to driving until we ran out of gas. “That’s a one-way street.”
“That’s not it anyway, Ma,” I argued. “Every street along here has pillars at its entrance.”
“Here try this one!” My mother was determined to try them all.
“Shouldn’t we ask directions?” Jerry pleaded.
My mother scoffed, “We don’t need directions. We’re very close.” 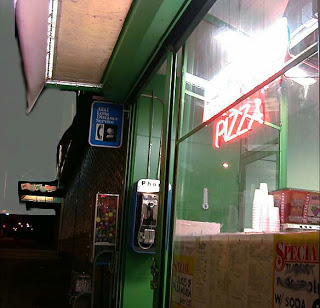 We approached a small shopping center on the right. There was a pizza place, a dry cleaner, a video store. And a pay phone! “There’s a phone, Jerry. Turn right here and pull over. I’ll call Matilda.”

“Here’s a quarter.” My mother began to rummage through her purse.
“I’ve got one,” I replied. “What’s Matilda’s number?”
“Ooh, what is it again?” Lilly began, “5-1-6 . . .”
“I don’t need the area code,” I rolled my eyes.
“Here. It’s in here,” my mother said as she handed over her miniature, 25-year-old, complimentary NY Telephone Company address book.
I left them all at the curb and trotted the 20 feet to the phone booth. I dropped in my quarter and quickly dialed Matilda’s number.
She answered on the first ring.
“Hi, Aunt Matilda. It’s Mitchell. Jerry and I took Lilly, Aaron, and my mother to the cemetery and we thought we’d stop by for a visit. But we got lost. We’re at a little shopping center. There’s a pizza place.”

When I told her the name of the pizza place, she laughed and said, “Oh, you’re very close.”

I groaned to myself.
“Just go west on Rosedale. When you pass the Jewish Center, turn left. Oliver is the second street on the right. You’re about three minutes away.”
“OK. See you in three minutes,” I hung up and returned to the car.
“You won’t believe how close we are,” I beamed — ignoring Jerry’s eye roll. “We’re only three minutes away. Just head west about a minute.”
“West? Who knows from west?” Lilly teased. “California is west.”
“California?” laughed Aaron, “Hoo boy, are you lost.” 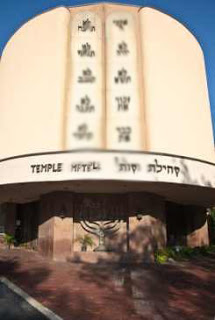 “Just turn around and head the other way,” I told Jerry.
Jerry made a U-turn and, almost immediately, we spotted the Jewish Center.
“There’s where Michael was bar mitzvahed. We go left there,” my mother exclaimed.
Jerry looked toward me for confirmation. I nodded my head and he did as my mother instructed.
“Then it’s your second right, Jerry,” I said.
There were no pillars at the corner of Matilda’s street.
“This isn’t it,” my mother snapped.
“Yes, it is, Ma.”
“There are no brick pillars,” she insisted.
“Ma, look at the sign. It’s Oliver Avenue. That’s Matilda’s street. And, anyway, these are the directions she gave me. There’s a white brick house on the corner. Is that what you were thinking of? Turn right, Jerry.”
“What’s their house number?” Jerry asked.
“I don’t remember,” was my unfortunate reply, “But, it’s on the left. I’ll recognize it.” And then I spotted it, a tired, but still elegant, gray-shingled, ’50s-era, split-level, “There it is.”
Jerry made a U-turn and parked in front of the house. 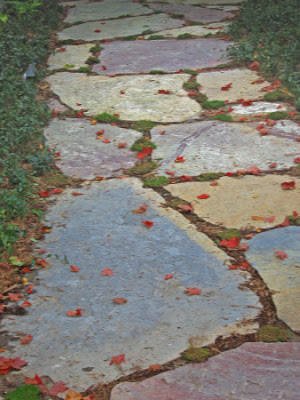 “This isn’t their house,” insisted my mother.
“Sure it is.” I had already jumped out of the car and was getting the step stool in place for Lilly’s regal exit.
“They don’t have a sidewalk leading to the door. They have flagstones,” my mother argued.
“The flagstones go from the driveway, Ma.  This is the house.”
“No, no, no, this is not it.”

“Where are we going?” asked Aaron.

“Is this the right house or not?” Jerry pleaded.

“It’s not the house,” my mother was certain.

“Well,” I snorted, “If it’s not, then why is Matilda standing at the door?”

Lilly imperiously took my hand and said, “Of course, it’s the right house. Didn’t we tell you we were close?”
And my mother followed with the refrain, “Very close.”