Skip to content
OR WHY I DON’T COOK, PART 1

Jerry and I had been dating for perhaps a month when he had what he insisted was a brilliant idea.  I tried to explain to him that I did not cook.  I tried to make him understand that my idea of a gourmet meal was Kraft Macaroni and Cheese with freshly crumbled bacon (none of those bacon bits from a jar in MY kitchen).  But, he wouldn’t listen.  I think he just couldn’t believe that anyone could be that disinterested, or unskilled, in the culinary arts.
So, it was Friday and it was my turn. Jerry was picking me up after work and we were going grocery shopping.  I had no idea what I was cooking.  I figured Kraft Macaroni and Cheese was not an option since Jerry had cooked some highbrow chicken (in a homemade sauce and everything) the week before.
My best friend, Brian, was the bar manager at a local Boston restaurant called Ken’s By George (known as “By George” to differentiate it from Ken’s deli upstairs).  It was right across the street from Copley Square.  I drank most of my lunches there and quite often stopped off for a drink — or three — after work.
I figured I’d get suggestions from Brian.  But, he wasn’t any better in the kitchen than I was.  He had once tried to bake cupcakes.  He bought a cupcake pan and the paper cupcake cups, but he didn’t use the cups because he was afraid they would catch fire in the oven.
Another regular at By George, Barbara, was at the bar and she told me she loved to cook.
“Shrimp scampi,” she proclaimed.
“Barbara, I need something easy,” I groaned.
“It couldn’t be easier! All you need are some really nice jumbo shrimps, garlic, and butter.  Melt some butter in the pan, add a clove of garlic, and drop in the shrimp.  They don’t even take two minutes to cook.  If you cook them too long, they’ll get rubbery.  If you want to really impress him, butterfly the shrimp.  They’ll look beautiful.  Serve it with some broccoli on the side.  A couple of wedges of lemon.  I’m telling you.  It’s so easy and he won’t know what hit him.”
So, shrimp scampi it would be.  Jerry picked me up after work and we drove over to Safeway on Boylston Street.  I bought a pound of jumbo shrimp for $10.95.  Big money in 1981.  Jerry was very impressed.  I picked out some fresh broccoli and a package of frozen, baked stuffed clams.  I had cooked broccoli in the past and the baked stuffed clams came with instructions.  Just pop them in the oven.

We headed to my apartment on Worcester Square.  Jerry took his briefcase into the living room to do some work and I headed to the kitchen to work some magic.

I lined up all the ingredients on my kitchen counter.  I preheated the oven to 300 degrees and put the baked stuffed clams on a cookie sheet, carefully sliding them into the oven.  I put some water up for a boil and dumped in the broccoli.

I then went to work on the garlic.  Now, I already knew at the time the difference between a head and a clove of garlic.  I wasn’t a complete novice.  I pulled away a clove and began to peel.  I peeled away one layer after another until there was no garlic remaining in my hand.  This was an indication to me that I had gone too far.  I went to work on another clove of garlic, this time stopping my peeling after the first paper-like layer came away.  I chopped up what remained and threw it in the pan with some butter.  Maybe a little too much butter.

I washed the shrimp.  They were beautiful.  I decided I would go all out and butterfly the shrimp.  I was determined to impress.  So, I dropped the first jumbo shrimp on the kitchen counter, hefted my knife, and realized I had no clue how to butterfly a shrimp.  Barbara was so matter-of-fact about it that I didn’t think to ask.
But, I’m an artist.  A visual person.  I could figure this out.  I flipped the shrimp back and forth a couple of times and determined the obvious way to slice a shrimp to make it look like a butterfly.  I placed the blade of the knife into the shrimp and pressed.  Nothing.  My knife was not sharp enough to cut into the meaty jumbo shrimp.  I would have tried another knife — I had three others — but they were identical to the one in my hand.  I had purchased the set one Saturday a couple of years earlier at the Aqueduct Park flea market.  They were a great deal.  The set of four wood-handled steak knives cost me only $1.  I now knew why.
Meanwhile, the broccoli was boiling away on the stove.  I turned down the heat.

The baked stuffed clams were beginning to smoke, so I frantically dragged them from the oven, grabbed a hot pad, and ran into the living room.  I tossed the hot pad and the cookie sheet of baked stuffed clams onto the coffee table in front of Jerry and ran out of the room.

“No time!” I hollered back.

He followed me into the kitchen with the cookie sheet and told me to just place the clams back in the oven on warm until I was ready to join him.

Fine.
The garlic and butter sizzled in the pan and I went back to work on my first butterfly.
I could get the knife to cut into the shrimp if I sawed quickly back and forth.  I hacked into the shrimp as much as I could and then tore it apart with my fingers to produce a rough-edged butterfly.  I did the same with the remaining shrimp and then threw them all in the pan.

I cooked them the two minutes Barbara had instructed and was about to remove them from the pan onto our two plates when I became concerned.  What if I undercooked them?  Couldn’t you die from undercooked seafood?  I left them in the pan a couple of minutes longer just in case.

I then dished up the shrimp and the broccoli.  The broccoli was gray-green.  It was too mushy to spear with the fork, so I had to scoop it out of the pan and onto our plates.
I then remembered the baked stuffed clams that had been warming in the oven.  I pulled out the cookie sheet, grabbed the hot pad, and carried them back out to Jerry.  This time, I placed them in the center of the dining room table as a side dish for our shrimp scampi.
I brought out the two plates of shrimp and broccoli and we sat down — Jerry excitedly — to dine.
We each took a baked stuffed clam and used our forks to scoop out the extremely dry and crusty filling.  It had definitely baked and then warmed way too long.
“This is fine,” said Jerry as he reached for his water glass. 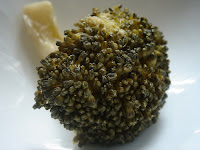 Next, the broccoli.  It was slimy.  And mostly gray.
“I cooked it too long,” I commented.
“No, it’s good.  This is how my mother always made it.”
And then the shrimp.
I hacked off a bite-size piece with my 25-cent steak knife.  I pressed into my plate to make sure the shrimp was securely on my fork.
It bounced.
I had overcooked the shrimp.  And, just as Barbara warned, it was rubbery.  Not just rubbery.  I had cooked up a batch of Superballs at $10.95 a pound.