Skip to content
OR WHY I DON’T COOK, PART 2

Even after the shrimp scampi disaster, Jerry was still not convinced that taking turns cooking was a bad idea.  Looking back, I’m not quite sure who this guy was.  Certainly not the same person who 10 years later would have an all-out panic attack and need to phone Yale University Urgent Care twice when he realized he had eaten a farm-fresh green bean that might have touched another green bean that might have had a tiny bit of white mold on it before it was washed.  How could this same person not be a little concerned about being fed shrimp or clams by the likes of me?

So, the next weekend, Jerry came over to my apartment on Worcester Square for my standard fare.  Kraft Macaroni and Cheese.  I was very skilled.  I had been cooking Kraft Macaroni and Cheese since the days you could buy five boxes for a dollar at the supermarket.  During my college years, my gourmet touch was to add a cut-up boiled hot dog.  I then graduated to Bacos, those mostly chemical bacon-flavored bits.  Before long, I was proudly preparing my bacon bits “from scratch.”  No more fake bits for me.  I fried up bacon in a pan until it was crispy, placed it on a paper towel to soak up the remaining grease, and I then folded over the paper towel and crushed, by hand, the bacon into bits — which I then had to carefully pick out of the paper towel fibers.  I will never be mistaken for Julia Child.

Something I didn’t mention when I told you about my vast experience cooking and eating Kraft Macaroni and Cheese was that I always cooked one entire box for myself, even though the box read “serves four.”  Also, I never bothered serving it up on a plate or bowl.  I stirred the packet of powdered imitation cheese, the stick of butter, and the quarter-cup of milk right into the 4-quart saucepan I had used to cook the pasta.  I then stood over the stove with a large spoon and ate it while it was hot — directly from the 4-quart saucepan. 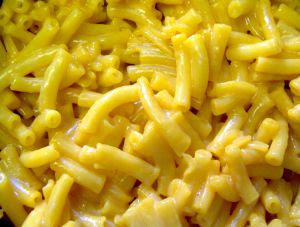 Jerry had told me to just do what I always did.  But I realized there were limits.  I cooked up two boxes at once in that same 4-quart saucepan.  I stirred in my gourmet bacon bits.  And I then split the contents of the pot onto two dinner plates.  In hindsight, a sprig of parsley might have been a nice touch.

The macaroni and cheese was no longer steaming hot, which disappointed me, by the time I carried the plates to the table.  We sat down and placed our paper napkins (Jerry owned cloth ones) on our laps.  Jerry slipped his fork into the large yellow mound on his plate intending to come back with a forkful of macaroni and cheese.  Instead, the entire mound moved as one unit.  The macaroni and cheese had cooled and hardened into a plastic-like mountain.

“I usually eat it right from the pot,” I explained.

We grabbed the car keys and headed over to Boylston Street for a decent dinner at By George.  Now, Jerry cooks and I clean up.

4 thoughts on “Kraft Macaroni and Cheese”