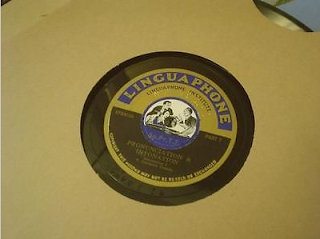 When I began to study Spanish in the 7th grade at Mark Twain Junior High School in Coney Island, we listened to Spanish conversation records.


A record was a round, flat, hard vinyl thing with a hole in the middle and spiral grooves on the surface. It played music and recordings when a needle was touched to it. I’m not making it up. I swear.

Anyway, the record, which I think was produced by Linguaphone in Rockefeller Center, began with a boy called Juan saying, “Hola, Isabel. ¿Como estás? (Hi, Isabel. How are you?)

I remember little after that opening until a conversation about what Juan’s mother was serving for lunch. Isabel asked and Juan responded sadly, “Seguro que albóndigas.” (Surely meatballs.) I guess Juan’s mother made meatballs all too often. For some reason that one phrase has always stuck with me and, whenever I have albondigas, it comes to mind. So, what did I have for dinner Tuesday night at Meson Salvador? Happily, !Seguro que albondigas!

I used to vary my order at Meson Salvador. But I hadn’t had their albondigas for a long time and they’re exceptional. However, instead of his usual (every single time without varying) bull’s tail and French fries, the ever-slimming San Geraldo, now 40 pounds/18 kilos lighter (What a man!), had a new-to-the-menu grilled seafood and vegetable skewer (with more grilled vegetables on the side). It was beautiful and delicious.

San Geraldo’s diet has been of tremendous benefit to us both. I usually eat very healthily along with him. And, since he’s no longer drinking any alcoholic beverages, I get both complementary after-dinner drinks wherever we go. It’s not easy, but it’s a sacrifice I’ll continue to make for San Geraldo’s well-being. What a man!