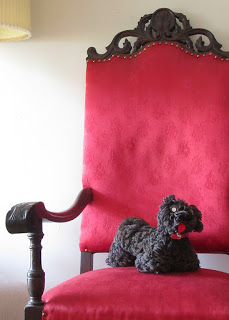 My Mother The Dowager Duchess was not an animal lover. Not by any stretch of the imagination. When she was a little girl, her mother got a cat to fend off any rat/mouse problem in their tenement apartment. My mother told me that one day, when she was around 9 years old, the cat jumped onto her lap and she sat and petted it for a while.

She said. “It was disgusting. I finally felt so sick that I pushed the thing off.”

My mother couldn’t understand how we allowed our California cats, Dobie and Maynard, to sit on the furniture. They weren’t allowed on tables or counters, but my mother found it just as bad that they were allowed on sofas and chairs.

Once, when my mother was visiting us in Santa Barbara, our long-haired, gentle, friendly cat, Dobie, walked by her chair. She reached down and stroked him absently before lifting her hand away in disgust.

I said, “How can you be like that? He feels like a fur coat! You love fur coats.”

DD’s Dog
The Dowager Duchess did have her own “pet dog” for more than 25 years.

She had created him from yarn, felt, buttons, and cardboard. She gave him a red leather collar with a gold buckle. Even he had to sit on the floor.

So, while we were cleaning out the apartment, I allowed the old boy to sit wherever he wanted. 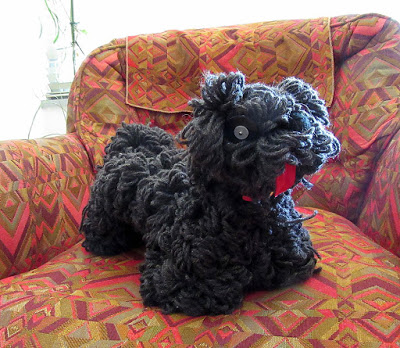 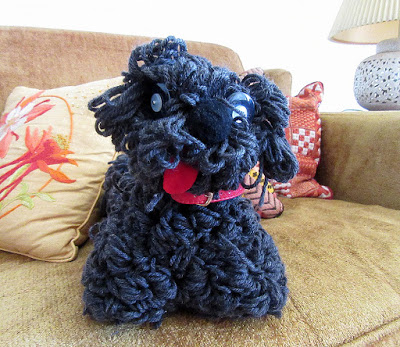 Our niece Lindy says Dudo looks like Kate Moss. He’s nice to look at, loves to pose, and his “head shots” always look like he’s sucking in his cheeks giving him that undernourished supermodel look (not that ALL supermodels have that undernourished look, but it IS one of the looks). Also, he seems to always know exactly how to tilt his head for best effect.

I’m fascinated by cats’ tails (and tales of cats, in case you hadn’t noticed). Our cat Dobie, in California, was long-haired with a huge (gigantic) fluffy tail. It had no tensile strength and just softly billowed in his wake. His brother Maynard (who was excruciatingly neurotic and of course we loved him), had identical markings but medium hair. His tail was almost prehensile.

When San Geraldo and I had our bed & breakfast hotel in Palm Springs, Maynard would walk out onto the patio, pass under one of the aluminum chairs, hook his tail to the underside as he went, and drag the chair along the patio behind him. Every single day for two years.

And every single day (for two years), the moving chair would scare the crap out of Maynard and he’d run back inside.

Dudo’s tail snaps, and curls, and waves. And when he lies idle, his tail seems to always be perfectly positioned to complement his pose. Sometimes, he even holds it in place.

Musy’s tail is soft and gentle and often gets in his way. So this is the tail of Dudo.

This song hasn’t stopped playing in my head since I began thinking about tail… oops, I mean tails. The Kid Brother had the record a very, very long time ago. And I, of course, would listen to it with him. He would never sing along, but I was expected to. I still know it by heart. It’s a whale of a tale…

And the long and the short of it is true…