Skip to content
BUT NOT AT THE SAME TIME 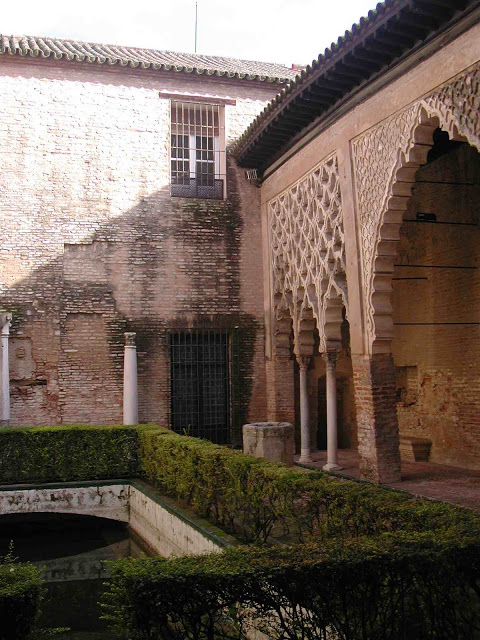 Saturday was a beautiful day in Sevilla.  We had cafe con leche at Nostalgia in the morning (well… afternoon) and headed to the Alcázar.  We had been around the outside of the “building” several times, but had never toured the inside.  Exploring Sevilla for us has been like opening a wrapped package.  An example was the Plaza de España where what we saw on the outside (the streetside) couldn’t possibly prepare for us for what was within.  The Alcázar is no different.

Walking around some ancient walls, I had thought that was the entire outer boundary of the Alcázar but it turns out that many of the “houses,” “buildings,” and even what I thought was a church in the neighborhood are all exterior walls of this amazing complex, which was a 10th-century palace built for the governors of the local Moorish state.  It’s still a royal palace — the oldest in Europe— but it’s now mostly a 14th-century rebuild.  It was built by Moorish workmen for the Christian king, Pedro I.  He was known either as “the Just” or “the Cruel.”  But it turns out the clergy and nobles called him “the Cruel” and the common people called him “the Just.”  So I might actually have liked this guy.

Flamenco… in Spanish Time
We finally got to see some real Flamenco performed Saturday night.  No dancer, but I think that made the music that much more powerful.  The guitar-playing and singing took our breath away.

We had stumbled upon a little neighborhood cafe/bar/restaurant when we went to the Museum of Art.  The name of the place is El Búcaro.  We had a wonderful tapas lunch there before touring the museum and we discovered that they had Flamenco Friday and Saturday nights at 9 p.m.  We decided to head there for dinner and Flamenco Saturday night.

We got to El Búcaro, about 8:15 and then, of course, had to get the details on how it all “worked” so Jerry could relax.  (Jerry likes to know how things “work.”)  We were told that Flamenco started around 9:30 or 10 (hmmm… but the sign says 9:00…) and we could have dinner any time before the performance, but not during as complete silence was required.  The back room (salon) was closed for prep.  We sat down for dinner (we were the only ones there), figuring the timing would be perfect.  We could have a relaxing dinner and then head into the salon in plenty of time for the show.

We ordered tapas portions and had an exceptional meal.  The best dish — good enough to order a second round — was espinacas con garbanzos, spinach and garbanzo beans, perfectly seasoned.  But everything was delicious.

We joked about the “schedule.”  I guess this was the “Spanish Time” we had been told about, although in all fairness it is the only time we’ve experienced it in our more than two weeks here.  (Our trains — although rarely facing the right direction, as you know — arrived and departed to the minute.)  Jerry continued to stew through dinner (no pun intended) about how things “worked.”

The restaurant got busy as time passed and people were constantly peaking in from the street, obviously to see if the salon was open yet for Flamenco.  This made Jerry more nervous; he worried they would grab all the good seats.  The singer and guitar player came in while we ate and went back into the salon to warm up.  They sounded amazing.

The place was clearly a family operation.  I got the impression it was mom in the kitchen, and two sisters and little brother outside.  On Jerry’s behalf, I continually asked our server questions (“Ask ‘er!”) about how things “worked.”  I explained in my best broken Spanish that this was our first ever Flamenco and also that Jerry was a worrier.  She squeezed my shoulder.  I’m sure she meant that as a way of saying, “Mitchell, you’re a saint” (although it’s possible she was simply letting me know that they had our seating well in hand and that trying to understand my broken Spanish was becoming more work than she had time for).

At the exact moment the doors to the salon were finally opened… at 10:10 (Flamenco at 9? Flamenco at 9:30 or 10:00?); we were personally escorted to a prime table designated with a hand-written slip of paper “Reservado.”  There were a few large tables and then just lines of chairs that formed a “U” around a small round table, with unlit candles and a couple of bottles of water, and two chairs for the performers.

We were honored to be treated with such kindness.  And Jerry relaxed… a little.  There was no heat in the salon, but the body heat began to warm things up.  Jerry kept his jacket on and put mine on his lap.  Sitting in his place of honor with his lap blanket, he could have been Pedro the Just (or more appropriately Geraldo the Stressed).

At 10:45, the performers were introduced.  The singer (cante), Alvaro Ramirez, settled into his seat, and the guitar player (toque), Pedro Viscomi, began to strum.  They were both young guys, possibly in their early 30s.  Pedro played and we watched Alvaro get drawn into the music.  His shoulders started to move, his jaw began to slide back and forth, his eyes lost focus, and then he began to sing.  The hair on my arms stood up.  And the more he sang, the more pure and powerful his voice grew.  No exaggeration, the music was so good that, at times, it made me shiver (and, no, I was not cold).  We were transported and, clearly, so was Alvaro Ramirez.

We watched and listened for about 40 minutes and then a break was announced.  Since the restaurant doesn’t charge for the performance, “half-time” as Pedro called it, is clearly how they make their living.  Unfortunately, Jerry and I were both exhausted and decided that the 15- or 20-minute break might go for a half hour or more (maybe it’s Flamenco time), and we just didn’t have the stamina last night.  With huge regrets and much gratitude to the performers, we walked home.  El Búcaro is definitely worth a return visit… and so are Alvaro Ramirez and Pedro Viscomi.

2 thoughts on “The Alcázar and Our First Flamenco”