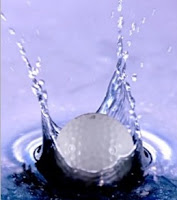 I don’t golf.  Jerry does; well, did.  There was a fairly large lake (aka water hazard) at Yale Golf Course that I remember Jerry talking about.  He said he would prefer to automatically take the penalty, walk around the lake, drop his ball on the ground, and continue playing rather than bother wasting his and everyone’s time — not to mention golf balls — popping balls into the water.  I apologize to golfers for my lack of correct terminology.  I don’t know if you even pop balls in golf (I know you can pop them in baseball).  I did, however, just look up the rules for golfing at a water hazard.  The rules state:  “When a ball is hit into a water hazard, the player may also drop a ball, behind the water hazard, on a line of sight between the hole and where the ball last crossed the margin of the hazard (no closer to the hole), at a penalty of one stroke.”  This is one of many reasons I don’t play golf.
Anyway, a fellow golfer once suggested to Jerry that he just throw his ball across the lake, which had Jerry laughing since that would probably cost him even more strokes… and golf balls.

3 thoughts on “Golfing the Water Hazard”