TURNED IN THE HONDA.  RENTED A FORD.
We timed our move to coincide as closely as possible with the expiration of our 4-year auto lease.  So this morning, another major item came off our ever-dwindling checklist.  We returned our Honda Element to the dealership here in Sioux Falls (we originally leased it while living in Las Vegas).  When I checked the odometer, I saw that we had driven 3,281 miles (5,280 km) since leaving California June 2. 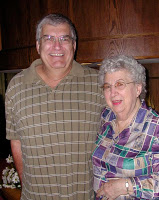 We’re back here in Sioux Falls for a few days before we fly to Los Angeles to pick up our visas; we then head across the country to New York to see my mother, brother, and other family and friends; and then we head off to Spain.  We can’t believe the big move is now less than two weeks away.  We’re anxious to get going, but it’s a joy to spend a little more time here in Sioux Falls with our other amazing nephew, niece-in-law, and their three exceptional children (and I speak of them all entirely without bias of any kind).

MURALS ON THE TOWN

On our way from Pierre to Sioux Falls yesterday, we made a little stop in Huron to meet “Lavon,” an old friend of ours (via Jerry’s mother).  We hadn’t seen Lavon in a long time and had a really wonderful lunch.  She’s 89 and still bowls (which is how she met Jerry’s mother in the 1970s) and golfs.  But she doesn’t just bowl and golf; she bowls and golfs well.  She’s got awards and trophies covering the shelves and walls of her apartment.  Buffets are standard fare in South Dakota.  So, we met Lavon at her favorite buffet restaurant in Huron; and it was good.  I ate healthy: an omelette and fresh fruit… I enjoyed it.  Jerry and Lavon had hearty food and gooey pastries… they enjoyed theirs even more.

THE MIDDLE OF NOWHERE
I had never been in Huron before.  It’s basically east of the middle of nowhere — two hours east of Pierre, which is in the center of South Dakota.  And, man, am I ever going to “get it” from Linda for equating Pierre with the middle of nowhere.  But, while I’m at it, I might as well mention two of my favorite Pierre T-shirts (especially since Linda bought me the first one way back in 1984; and I still have it; and it STILL fits).  1) Pierre, South Dakota, is not the end of the world.  But you can see it from there”; 2) “Welcome to Pierre, South Dakota.  Set your watches back 10 years.”  You would truly appreciate T-shirt #1 had you spent Christmas 1983 with us in Sioux Falls (where we were stranded for three days) and Pierre.  The windchill was minus 82 degrees Fahrenheit (minus 63 degrees Celsius)!

BUT BACK TO HURON IN SUMMER
The city of Huron (population approximately 13,000) was surprisingly charming with a wonderful public arts project — outdoor murals gracing the sides of downtown buildings.  The murals are intended to “depict unique aspects of Huron’s history.”  After spending a life-enriching three hours with Lavon, we were anxious to get back on the road to Sioux Falls.  But, we made a quick circuit of the town so I could snap away at some of the inspired and inspiring public art.

9 thoughts on “Returning the Car After Seeing the Art”