The Parachute Jump still stands as a recognizable icon of Coney Island.  It was moved to its current location in 1941 from its original spot at the 1939 New York World’s Fair in Flushing Meadow Park.  The ride became part of Steeplechase Park, which closed in 1964, the year my family moved to Brooklyn from Long Island.  I don’t remember the ride running after Steeplechase Park closed and for that reason alone (or simple cowardice), I myself never rode the Parachute Jump.  My mother, however, did.

The story I remember from my childhood — this is what I remember my mother telling me when I was 10 — was that she rode the Parachute Jump with my father when they were first dating.  She would have been 16 and he 17.  More of the story that I remember my mother telling me was that she went on it to impress my father.  Now, the Parachute Jump was not something I could imagine my mother riding.  In fact, I had never seen my mother go on any ride at an amusement park.  They all made her “too dizzy,” she insisted.  So, when she told me the story and I asked her why she didn’t go on rides any more.  Her response was, “Well, your father married me.”
A few years ago, while my mother was visiting us in Las Vegas, one of my cousins was also visiting and we were talking about Coney Island.  My cousin was from LA and she had only seen Coney Island once when she flew in for my mother’s 80th birthday.  In jest, I began to tell my cousin how my mother had tricked my father into marrying her by going on the Parachute Jump and making him think she was fun.  But, my mother immediately corrected me (she does that quite a bit).
“No. No,” she said.  “I didn’t go on with your father.  He was in the Army.  Harriet and I picked up a couple of sailors.”
What?!?
We all burst out laughing.  “YOU picked up a couple of sailors?” I roared.  (If you met my very proper mother, you would know how absurd the idea would be — even the fact that she could say something like that aloud.)
And then the back-pedaling began.  “Well, Harriet did the picking up.  She was much more forward than I.  I would never do anything like that.”
I had tears in my eyes. “But you and Harriet picked up a couple of sailors?”

“It wasn’t like that.  It wasn’t nice for two girls to go on a ride like that by themselves.”

“But it was nice to pick up a couple of sailors?”  I was having such a good time.  “What about your husbands?”

“Well, of course, we weren’t even engaged at the time.  Murray was in the Navy and your father was in the Army.”  My mother was actually blushing now and Jerry and my cousin Joan were wiping tears from their eyes.

“They walked us to the subway station and we took the train home.  It was completely innocent.”

We recently took my mother to a local diner for lunch.  The diner is called “The Parkview” because it’s not far from the Coney Island amusements and you can see some of the rides from its south-facing windows.  I was gleeful when I saw the photos on the cover of the large (diner-sized) menu.  There were old shots of the rides and amusements at Coney Island, including the Parachute Jump.  And at the very bottom of the cover… my mother and Harriet’s sailors! 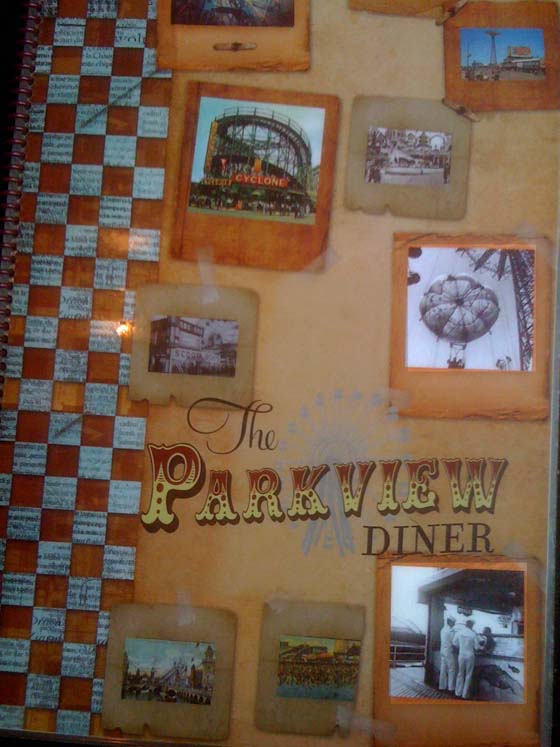 11 thoughts on “Picking Up a Couple of Sailors”