Yesterday, we had the pleasure of meeting our friends Cesar and Daisy (of Olga Chickaboomskya fame) at Grand Central Station for lunch at an Italian Café called the Cucina Express.  It’s in the Metlife Building, which used to be the Pan Am Building (and for me still is).  The building is attached to Grand Central and is a standard short-cut for commuters to avoid the cold of winter (and the heat of summer for an extra block).  For six months in the 1980s, I commuted daily to New York from Connecticut and the Pan Am Building was my short-cut to my office on 56th Street.

As we walked from the subway, we headed east on 42nd Street, first passing the New York Public Library and catching great views of the Chrysler Building, one of my favorite buildings in the city.  I love the way it shines in the sun.

Lunch was excellent.  When our server first came to the table, Jerry, without thinking, responded to her in Spanish.  Her name was Reisa and she was originally from Ecuador, so she didn’t mind at all.  The food and service were exceptional.  Reisa made it even more memorable. 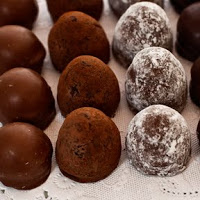 After lunch, we strolled up Fifth Avenue (in the Christmas mobs) to window-shop and to finally see the ice-skaters and Christmas tree at Rockefeller Center.  It’s a holiday tradition.  Jerry and I hadn’t seen the tree since moving to the West Coast in the early ’90s.

On the way, we stopped at Teuscher Swiss Chocolates on Fifth Avenue because Daisy said they had the best champagne truffles, among other things.  They do.  They also charged a month’s rent for 10 pieces.  We mixed up a box of 6 for ourselves (should have just stuck to those amazing champagne truffles, although everything was good), and we bought four champagne truffles for my mother who has managed so far to eat only one.  I inhaled my three pieces in the first 10 minutes at home.

We finally made it to Rockefeller Center.  I always love seeing the tree and watching the skaters down below.  For a year in the mid-’70s, I worked for an ad agency in the McGraw-Hill Building on Sixth Avenue.  I used to love to grab a hot dog on the street and sit and watch the skaters (or spend my entire pay check at Sak’s Fifth Avenue another block away).  I don’t remember such huge crowds.  It was a bit claustrophobic at times and not always easy to get a clear photo.

After Rockefeller Center, Jerry and I needed to head back to the subway.  Cesar and Daisy, brave souls, were going to hit some stores and do some shopping.  We continued up 50th Street, walking by NBC Studios and Radio City Music Hall.  Pedestrian gridlock!  We could barely move on the sidewalk and were so happy to get below ground to the subway, which was surprisingly empty for the ride home.

Any time we spend with Daisy and Cesar is energizing.  It’s because of Daisy that we began to seriously consider Sevilla as a place to live; they were there many years ago and she said it was her favorite city in Spain. We hope they’ll come back to Sevilla soon.

28 thoughts on “On the Avenue… Fifth Avenue”