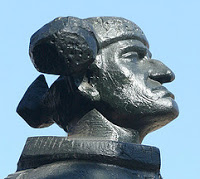 I haven’t yet replaced my camera. I went online and found what I want at a very good price. But, I didn’t immediately order it because it meant I would have to wait a week for its arrival. So now, 1-1/2 weeks later, I haven’t found the camera around town for a comparable price and will order it … and wait a week. Meanwhile, I’m still using my phone to record my experiences.

I took a walk to Triana last week under another brilliantly blue and sunny sky. Although I’m not a fan of bullfighting, to say the least, there’s a statue that I do like that’s dedicated to Juan Belmonte (1892–1962), Triana’s most famous bullfighting son. I took a picture of the statue when we were here for the first time in January 2011 because I was taken in by his profile (an excruciatingly prominent nose). The statue was tucked into some trees and, from my angle, I didn’t immediately realize it was very contemporary. So, I now find it interesting for more than just his nose.

On this walk, when I was behind the statue and glanced back at the city, I saw that La Giralda (the Cathedral’s bell tower) was perfectly framed in one of the cut-out spaces in the form. Belmonte’s technique was unlike that of earlier matadors. He stood erect and motionless within inches of the bull. As a result, he was frequently gored. In a 1927 bullfight in Barcelona, he was gored through his chest and pinned against the wall. I wonder if the empty space in the sculpture symbolizes that little event.

14 thoughts on “Profile (and Silhouette) of a Bullfighter”