Skip to content
… But You Can See It From There. 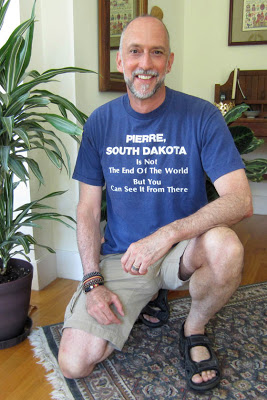 That’s the slogan on my favorite T-shirt. Linda and Alice sent it to me in early 1984 after Jerry and I traveled to Pierre from Washington, D.C., to spend Christmas with the family. The reason for the T-shirt? The windchill was -81F when we got stranded in a blizzard in Sioux Falls and all Mid-Western airports were forced closed. We made the usually 4-hour bus ride to Pierre three days later. That took 9 hours. We spent five days in Pierre. The high temperature that week was -5F. The T-shirt must have been made to withstand the extremes of the South Dakota weather. Not only does it still fit (credit goes to me), but it’s still in great condition (and I’ve worn it a lot).
Since our arrival in Spain, I’ve seen all sorts of odd variations on the English language proudly displayed on T-shirts. “IF YOU THINK THAT I HAVE HEAT… WE MY PLACE, YES.” Sorry I didn’t get a picture of the woman wearing that one, but she was in her late 60s, sour-looking, and quite dowdy. I didn’t think she’d appreciate my attention. Anyway, I’m quite sure she was without “heat.”

Another T-shirt I’ve seen in Sevilla was stretched-to-bursting across the massive chest of a 20-something bodybuilder. His shirt read: “YOU CAN LOCK, BUT DONT TUCH.” I had no idea what I was supposed to do. I was afraid to ask if a photograph was also forbidden.

I’ve been thinking of starting a collection of poorly translated English T-shirts. Many of these shirts are, I believe, produced in China in English for Spaniards. Some of my acquaintances have laughed when I’ve told them what their T-shirts really say or what I think perhaps they’re meant to say — when I can figure it out.

Before we left the USA, T-shirts (and tattoos) written in Asian characters had become very popular. I wonder how many guys are surfing Hungtington Beach with tattoos they think say “PEACE” when what they really say is “PEE”… or who knows what else.


Now, I’m on my way out for a walk in the glaringly bright sunshine. I hope to see some good T-shirts.

28 thoughts on “Pierre, South Dakota, Is Not The End of the World…”