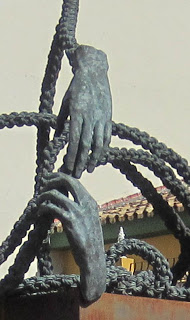 Fuengirola has a number of public sculptures. In addition to the promenade, parks and plazas that are homes to the art, there are roundabouts/rotaries/traffic circles (depending on where you’re from) that serve as great spots, as well. One close to our house is by a sculptor from Málaga named Charo Garcia.

I didn’t understand the meaning of the monument until I returned and found a plaque posted nearby. Then, I at least knew the purpose, but I still don’t quite get “it.” Maybe I’m not supposed to. It’s a memorial to victims of terrorism (all victims of all kinds of terrorism).

I suppose the piece worked for me on a gut level, since I immediately found it very disturbing.

Our neighborhood of Los Boliches was a fishing village and is still well known for that. I assumed the dismembered hands were holding onto nautical rope and the area below, although looking kind of like barbed wire, was a tangled net on the sea floor. I figured it was a memorial to those lost at sea.

What I’ve since learned is that the monument symbolizes (roughly translated from a description I found online) “… the collision between life — represented by the hands of a woman — and the bonds and lack of freedom — represented by strings.” I admire the intent of the piece and, as my aunt used to say when she didn’t quite comprehend but didn’t want to appear ignorant, “Interesting.”

Art appreciation is very personal, so I know that my experience of a piece will be different from the experience of someone else. Music appreciation is no different. I love jazz, but either my ear isn’t refined enough or I simply don’t have a taste for jazz improvisation. When we arrived at breakfast on the promenade yesterday morning, and a musician arrived with an amp and a jazz guitar, I thought, “Oh, crap, an amp; there goes our peace and quiet.” Then he set up a little rack to sell his own CDs, and I thought, “Well, maybe there’s hope.” I figured he had to at least take his music seriously if he was willing to invest in producing a CD.

It turns out we enjoyed his playing so much that we bought a CD. In addition, he was a pleasure to visit with. His name is Javi Rosso and he performs two nights a week (Thursday and Sunday) in Málaga with a sax player at a restaurant named Citron. We were told by one of the waiters that they’re an exceptional duo. Maybe an evening trip to Málaga is needed. Maybe I’ll even develop an appreciation for jazz riffs.