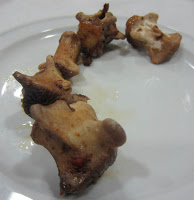 One of our favorite places for a meal in our neighborhood is Meson Salvador. It was where we enjoyed our first lunch when we were apartment hunting in early February. We had no idea how lucky we were to stumble on the place that day. I must say that we have been treated consistently well just about everywhere we’ve been in Fuengirola. It’s definitely a friendly, easy-going, warm, and welcoming town. But, the people at Meson Salvador refer to everyone as “familia” (family) and they mean it. We even feel perfectly comfortable and content hanging out with “the guys” [mostly] watching European football on TV.

The food is consistently excellent. I’ve gotten stuck in a rut with their incredible albondigas (meatballs) and I’m trying to vary my repertoire now (especially since they give me a hard time about my predictability). Last night I had croquetas de pollo (chicken croquettes). The time before I had a fish and vegetable fry. San Geraldo’s favorite dish is “rabo de toro” (bull’s tail). It’s apparently the best rabo de toro he’s had. He has ordered it almost every time and nobody raises an eyebrow. I guess some people are allowed to be predictable.

22 thoughts on “Meson Salvador and the Tail of the Bull”