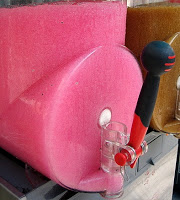 Our breakfast haunt is a place just down the paseo from us. It’s called Cafe Manila. It’s run by Brits who have lived here for years, and it’s staffed by people from all over. Some grew up right here in Fuengirola. Some are raising families here. And they all have a love and respect for Spain and Andalucía. Although none of the staff speak American, they are fluent in Spanish as well as British English (which is a very peculiar-sounding language much more difficult to understand than Spanish).

There’ll be loads of stories to come I’m sure about the gang at Cafe Manila, but this is a basic introduction to Ann. Ann likes to do creative things with her hair. She’s got a tuft (bangs, fringe) in front that she regularly dyes in shades not found in nature (well, not found in the nature of human hair).

A couple of weeks ago, Ann arrived at work with a bold purple fringe. She then made the mistake of telling me that Cafe Manila used to serve “slushies” in oddly unnatural fruity colors. One day a long time back, Ann arrived at work having just had her hair done. Richard took one look and said, “What did you do, get your head stuck in the slushie machine?”

I began calling Ann “Slushie” — after of course asking her permission. She said she didn’t mind at all. “Anything for attention.” But now, apparently, the nickname has begun to appear in comments on her Facebook page (i.e., “Nice photo, Slushie!”). I’m pleased to know I have such influence.

This post isn’t supposed to be entirely about Slushie. (I’m thinking of doing a future post called “Fifty Shades of Slushie.” I can already hear her laugh.) This is instead to share a photo of Ann’s son’s latest sailing session just off the coast. At the ripe old age of 11, he’s already so skilled that he’s taken the boat beyond the harbor and out to sea.

19 thoughts on “The Sweetest Slushie”