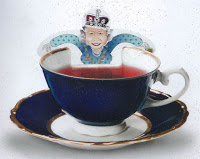 The other three members of Our English Family were just in Fuengirola for a week. Sister-in-law Melanie is a bit of a tea connoisseur, which translates to being obsessive-compulsive about her tea. Last year when they visited, they were shocked to learn I was microwaving my tea water, so left an electric tea kettle for me (knowing that putting a pot of water on the stove to boil was beyond my “cooking” abilities). (Click here for that story.)

Melanie does however tolerate my use of tea bags. So, this year, the family arrived with a jar of lemon marmalade for San Geraldo (which he will kindly share with me — whether he wants to or not), another box of Maltesers for me (which I’ve already finished, sharing with no one), two souvenir tins of mints, and an elegant set of five “royaltea.” Oddly, Prince Phillip was not included in the set. But then he’s not known for always behaving in the best of taste.

I haven’t had the heart to open the package. I really should. I’ve been “cooking” my own gourmet breakfast every morning and a nice cuppa would be the perfect complement. My specialty (well my only-ty) is a bowl of muesli, a cup of yogurt, and fruit. Sometimes I cut up fresh fruit — when I don’t mind the extra work (and the risk of cutting off a finger). Other days, I open a can. Most days, the can is as much cooking as I can manage. I offered to cook something for the cats this evening. You can see their ungrateful reactions below.

27 thoughts on “Having The Queen For Tea”