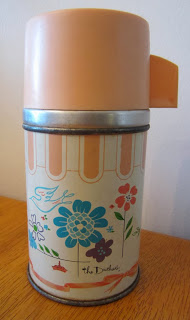 Oh, wait, I think maybe the title should have been the “certified” Duchess. Or maybe not even that. It’s just that I gave my mother the title of Dowager Duchess only in the last couple of years, and now I’ve found proof that she held the title of “Duchess” at least 50 years ago.

The Dowager Duchess and I were cleaning out a couple of kitchen cabinets this morning. My mother had a set of “movie dishes” that she and her mother collected in the 1940s. Every time you went to the movies, you got a dish. They amassed five services for 8 and my mother kept two, one of which she gave to me for my first apartment. The Duchess’s everyday dishes have been depleted over the years, and she won’t use her fine china for everday use — not because she’s saving her fine china for posterity, but because she has never liked her fine china. So she thought perhaps she could start filling in with some of the movie dishes — specifically large soup/cereal bowls. The dishes were stacked up in the back of an upper cabinet (above the broom closet) and the Kid Brother has never been in the mood to climb up and empty the cabinet for her. Every time she asks, he says, “Some other time.” Even I at my “elevation” needed to use the step stool. The Kid Brother is about 6 inches shorter (although, even at that, he towers by that same amount over our Mother The Dowager Duchess).

Among the miscellaneous things — like a stovetop percolator from the year of the flood (and I’m not talking last year’s Hurricane Sandy), and a first aid kit containing salves and ointments that expired in 1980 — there was a musty shipping box and a couple of thermoses. One thermos was last used in 1987 when my mother brought pea soup to the hospital for my father. It was his favorite, but by that time, he could only manage one sip. Still, it made him happy. The other thermos apparently belonged to The Duchess — although I can’t imagine The Duchess drinking from a plastic thermos cup. But I know for certain it was her thermos because it’s got her name on it — just like Queen Elizabeth’s things are personalized with “HRH,” this one is inscribed, “The Duchess.”

The musty shipping box was a mail order package to The Duchess from the Kraft Foods Company. The address label was for my parents’ first home on Van Siclen Avenue in Brooklyn, which we left behind for suburban Long Island in 1956. I thought the age of the box was novel enough but then I noticed that I had doodled a bit on the box.

I said, “Oh, God. Look, I doodled on the box.” The Duchess said, “You doodled on everything!” She’s right, of course. She used to take pens out of my hands when we sat at the dinner table. I couldn’t help myself. This was clearly one of my lesser works. There were very few sketches and there was still considerable surface area remaining to be covered. Inside the box was a set of stacking cake pans for making a layer cake. Along with the percolator, thermoses, and extra movie dishes, we have a load to be delivered to the charity shop down the street.

23 thoughts on “The Certifiable Duchess”