During Judyshannonstreetwhat’s visit (click here if you don’t know what I’m talking about), she and I went to the Picasso Museum in Málaga (the city of Pablo Picasso’s birth). It was my first time at the museum and I loved it. Judy(etc.) had not been a big fan of Picasso, but she, too, loved the museum and left with a better appreciation of his talent and genius.

When we got off the train in Málaga, we stopped in a cafe for a quick drink (really to use the “services”). I had a special fondness for the still life set up in the café.  I call it “Naturaleza muerta con Jesús y un jugador de fútbol desnudo,” (“Still life with Jesus and one naked football player”). I asked the bartender who the fútbol player was (or players… the guy in the middle didn’t look the same). She had no idea. Maybe you can help?

Photography is not permitted inside the exhibit areas of the Picasso Museum, so, you’ll have to check out the museum for yourselves to see more (http://museopicassomalaga.org, if you can’t get to Málaga). I think they did a brilliant job of converting (and preserving) the former private palace (and some surrounding buildings) into a stunning exhibit space. It’s believed that the 16th-century palace was built over the remains of a Nasrid Palace (the Nasrid Dynasty ruled Málaga and other cities of Southern Spain from 1232–1492). An original tower still stands and was incorporated into the 16th-century palace.

Judyshannonstreetwhat’s Aha Moment
After the museum, Judy(etc.) and I stopped at a shop with gifts that were much nicer than the standard souvenir shop fare. Judy bought three sets of fun and unusual salt and pepper shakers. 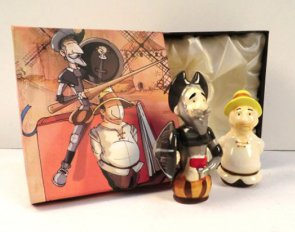 The salesperson was a charming young guy named Leo (sorry, no photo). Judy had been practicing her Spanish throughout her visit and was doing amazingly well.

I could see the wheels spinning in Judy’s head as she repeated aloud, dragging out the last two words: “…és usted.” Suddenly, she smiled, poked her finger in the air as if to say, “Eureka!”

“¡Bien, gracias!” was her joy-filled response. [Fine, thank you!]

I’m not sure. I think Judy might have immediately commanded, “Do not put that in your blog!”

But, as I just mentioned, I’m not sure.