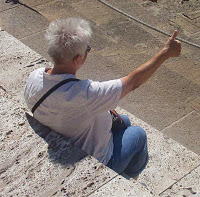 Judy and I spent the afternoon (and well into the evening Thursday) in Málaga. Mostly, we explored the Teatro Romano, the Roman amphitheatre built in the 1st century and re-discovered in 1951 during the building of a Franco-Era cultural centre. Once discovered, an archaeological dig began, but Franco’s cultural centre was completed anyway. The Teatro Romana was again used for performances.

In the 1980s, it was decided that the cultural centre was impacting the survival of the theatre (and covering over about half of it) and it was torn down as a symbol of the break with the dictatorship ended less than 10 years earlier. Restoration continued and it was learned that in the 3rd century, after the fall of the Roman empire, the area became a fish-salting plant and then a necropolis. Many of the capitols and columns were used in the construction of the Arab Alcazaba fortress (click here) that was built in the 11th century on the hill overlooking the area.

Arrivederci, Roma (my gift to The Dowager Duchess — Mario Lanza)…