We drove 50 minutes to Antequera Wednesday. We’d been there before (click here and here) but hadn’t explored the World Heritage Site, Bronze Age burial mounds outside the city. 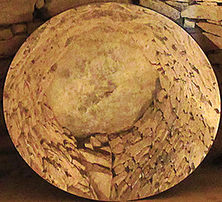 Created between 3000 and 2000 BCE, these “dolmens” are the largest in Europe. When “Dólmen de Menga” was opened in the 19th century, several hundred skeletons were found. Just beyond it is Dolmen de Viera.

A bit further from town is the Dólmen del Romeral. It’s newer, dating back to ‘only’ 1800 BCE. When we arrived at the entrance path, it was swarming with bees. I’m allergic and I didn’t have an EpiPen, so I decided to stay clear.

San Geraldo walked through the bees and went inside. He came out and told me that I really had to see this one because it was so different. He said the bees didn’t seem to be bothering anyone. No way, I thought. “No way,” I said. I refused to take the chance.

But then I said, “Antequera Hospital is just 5 minutes away. OK.”

Inside was wonderful. I was so grateful to have risked tit — especially since I didn’t get stung by the largish, blackish bees. Maybe some kind of Carpenter Bee? They were frenetic. A couple bounced off my bare arms as I passed, but they weren’t at all aggressive.

I feel so brave. And yet, today I think I should pick up a new EpiPen.

(Click the images to see them swell to twice their size… at least.)