When we moved to Las Vegas in 2007, it took me three weeks to “cook” myself breakfast.  That involved opening a packet of microwave oatmeal, pouring the dry contents into a bowl, adding a quarter cup of milk, placing it in the microwave, setting the timer, and pressing start.  When the microwave “dinged,” I removed the bowl, stirred in a cup of yogurt (very gourmet), and ate.  I was  proud of myself (still am) and I told Jerry so.  He was not impressed.

It has taken me more than two months to finally “cook” in our kitchen in Sevilla.  But, I overcame my fear and did so this afternoon.  I didn’t even need to read the instructions to figure out how to work the microwave.

Here in Sevilla, we currently have three lonely house plants.  We’ll eventually get more, but we’ll probably wait until spring before we plant anything on the balconies.  When we lived in Guilford, Connecticut — the money pit — we had large gardens to maintain and enjoy. Attached to the back of the house was an expansive, old, creaky deck.  We, of course, decided to replace the deck with something crisper and more stable, which meant that some of the old plantings surrounding it were trampled or cut back.  Clematis grew at the bottom of the main stairs to the backyard.  During the deck construction, the new growth was completely trampled.  So we were thrilled and surprised to see it come back to life and begin to thrive.

Our friend Judy has regularly visited us wherever we’ve lived.  When she stayed with us in Connecticut, she “earned her keep” by spending hours weeding the flower beds.  Judy is the ideal weeder; she zones out and completely focuses on the task at hand.  She always worked hard when she visited but we would allow her some moments here and there to relax.

One afternoon as I vacuumed the pool, which was located halfway down a hill away from the house,  Judy sat across from me reading a book and dangling her feet in the water.  Jerry was up at the house watering plants around the deck.  Suddenly, he called out.

“What happened to the wisteria?”  He sounded angry and having already inspected the plantings around the deck myself I knew exactly what he was referring to.

I turned my back to Judy blocking her view of Jerry, trying to discreetly wave my hands across my body to let him know to not go any further.  He didn’t catch on.

“Who pulled out the wisteria?!?” He was clearly upset.

Judy asked, “What’s he talking about?”

“Who knows.” I responded with mock indifference as I turned my back again and waved my hands in his direction.

“But, the wisteria!” he sputtered and I realized it was hopeless.

I gave up and turned to Judy, “There was no wisteria.  He’s talking about the clematis,” I explained.  “You ‘weeded’ the clematis.”

Jerry again called out, “What happened to the wisteria?”

But this time, Judy sweetly called back, “Nothing.  But I pulled out the clematis.”

We all cracked up.  All was forgiven and Judy flew home to Seattle about a week later.

Not long after that, the clematis came up from the ground with multiple shoots.  It was stronger and more lush than before.  So much for Judy’s ‘weeding’ skills.

A few years later, we planted wisteria in San Diego.  We didn’t let Judy anywhere near it.

Our house is not crooked.  It is level, solid, renovated, and in excellent condition.  But many of the houses we pass are not in the same shape.

Given that some of the houses we see around town are anywhere from 100 to over 600 years old, it’s no surprise they’re bent and twisted.  However, it’s a wonder some of the buildings I’ve seen are still able to stand.

Without help, some of the crooked buildings won’t be standing much longer. Fortunately, many have been reinforced and only appear to be twisting and collapsing into themselves.

Since our arrival in Sevilla in July, Jerry and I have said some funny things in Spanish — while not intending to say some funny things in Spanish (remember when I said cojones — anatomical balls — instead of cajas — cardboard boxes).  And Margarita has misunderstood some of what we’ve said (remember when she thought we were saying Jerry was from Santacoda as opposed to South Dakota, and then tried to find Santacoda on a map). 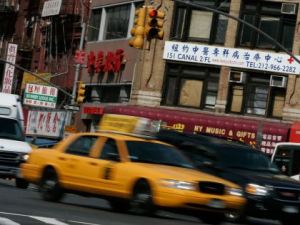 But the “lost in translation” flub that now has me laughing is one I heard Friday night at a wonderful dinner arranged by Albert and Lola, when we met Manuela, Alejandro, and Alejandro’s sister Pastori.

Alejandro knows only a few words of English and he told his story of going to New York some years ago.  He was in Midtown Manhattan and wanted to visit Chinatown.  The extent of his English at the time was, I think, “excuse me,”  “hello,” and possibly “thank you.”  Alejandro is not shy.  He figured if he simply hailed a cab and then said to the cab driver, “Excuse me, Chinatown,” the driver would understand and get him there.

The New York cabby did a double-take when this burly, well-dressed man jumped into the back seat and announced in a rich basso voice “Kiss me, Cheenatown!” 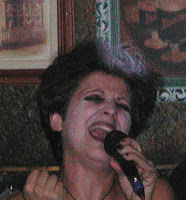 I had the joy last night of seeing a live performance at the bar downstairs.  Teré (short for Terésa) works days at El Sanedrín waiting tables, tending bar, and making people feel at home.  Three nights a week, she sings at a club outside of town — a club too far for us to easily visit without a car.  So, we were elated when she told us that she would be performing right here in our building on Halloween night.

Teré is one of those people who brightens any day just by being in it.  We see her and get to visit with her every morning when we go downstairs for café con leche and breakfast #2.  The first time we met her, she warmly welcomed us as neighbors and gave us both “Spanish kisses.”  She speaks little English, just some pat phrases she has picked up over time.  But her pronunciation is impeccable.  It must be her musical ear.  I arrived downstairs around midnight and Teré, dolled up like a mod Bride of Frankenstein, was already mid-song.  What a voice!

Between numbers, Teré actually introduced her friend “Mee-TCHELL” to the audience.  During her 10-minute break between sets, she grabbed me and asked if I wanted to head next door to Dos de Mayo so she could get a quick snack.  Unfortunately, Dos de Mayo was closing up for the night.  No food for Teré but, as a consolation prize, all the guys behind the bar sang to us.

After her break, Teré sang a bunch more songs in English, phonetically — some that I knew, some that I did not.  She also sang several songs in Spanish that were a huge hit with the audience.  She even sang one song in Portuguese, also phonetically.  The music, the spontaneous rhythmic clapping (Flamenco style) carried me away.  I, who don’t dance, was actually swaying like a Spaniard at times.  (From what I’ve seen, Spaniards — well, Sevillanos — know how to move.)  Her delivery was so powerful, whether she was belting or singing a ballad, that I was moved even when I didn’t understand all that was being sung.  I had tears in my eyes by the end of “Killing Me Softly.”  Move over, Roberta Flack!

The small bar was filled with admirers, some clearly knew what they were
in for. Others were — like me — blown away.  I wish she had a CD.  I
wish she had a video on YouTube. I wish she would sing to me every
morning while I’m drinking my coffee.