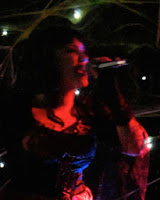 This is a first for me. I actually went to a bar to see a country music duo perform. (That’s American Country Music.) The duo call themselves “Stereo Snakes,” and they’re performers, writers, and composers. The vocalist is Nicole Allan. The guitarist is Kasper Jensen.

Before I left the house last night, San Geraldo decided he wasn’t up for an outing to a noisy bar. I wasn’t surprised. I headed off solo and when I arrived I found Nicole was solo, as well. Kasper was unable to make it, so Nicole had electronic back-up for her performance. When she saw me, she came running across the room to hug me and thank me for coming. However I didn’t know it was Nicole because she was vamped up for Halloween. I was relieved when I recognized her voice. (Either way, it was nice to feel welcome.) Chris and Francis, owners of Cafe Manila were also there. So, despite San Geraldo’s absence, I was in great company.

We know Nicole as a gentle, soft-spoken, reserved, polite, and excruciatingly respectful young woman. (There’s a “slight” difference in our ages, which could account for the respectful bit.*) But when she starts “saingin’,” she’s someone else entirely. I won’t try to describe the beauty, depth, and power of her voice. But, Dolly Parton should hear Nicole’s rendition of “Jolene,” which I wish I had recorded. (Click any image for a closer look.) Watch and listen to Stereo Snakes’ latest demo at the end of this post.

Nicole is pure Country, although she’s not American (not even South American). She’s English. But she was born and raised right here on the Costa del Sol. She of course speaks fluent Spanish. She also speaks fluent English (the Queen’s English, as in HRH). But when Nicole starts singing, you’d swear she’s from deep in the heart of Dixie.

To sum things up: I moved to Málaga to go to my first live performance of American Country/Western music and it was belted out by a soft-spoken, blonde, English girl from Spain. It makes perfect sense.

*NOTE: The slight difference in age? Let’s just say I could be (easily) Nicole’s grandfather.