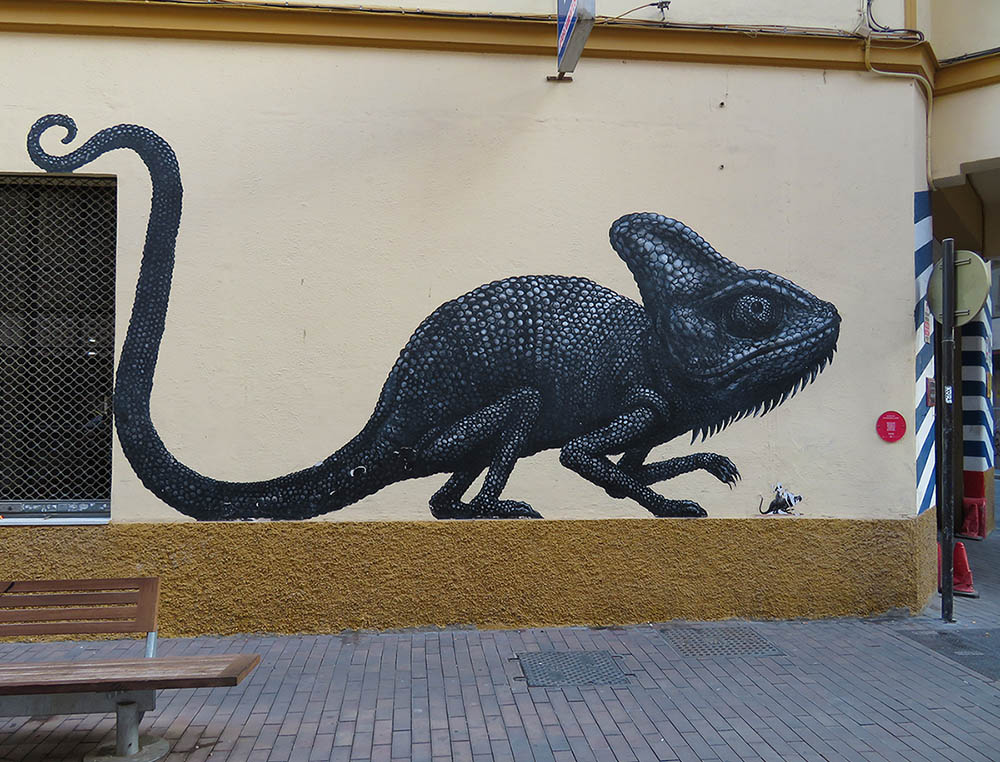 When we met our friends at the Port of Málaga last week, we walked through a neighborhood just south of the old city center (and north of the port). It’s called Ensanche Centro, which means Center Expansion.

I’ve often heard city dwellers (especially in New York) refer to squirrels as rats with fluffy tails. I never really agreed until we came upon some mural art. Now I see their point. As for the lizard or dinosaur or basilisk at top, we simply loved it.

Old friends of San Geraldo’s from his university days (I’ve only known them about 35 years) have been cruising the Mediterranean on a small (90-passenger) ship with an overnight stay in Málaga. We were looking forward to seeing them again and were invited by the onboard hotel manager to join them for dinner Monday evening.

They had an unpredictable trip the previous days. Seas were rough and they were forced to skip some planned stops. But the sun was again shining and the seas were calm. Unfortunately things wouldn’t remain that way.

We received a text message mid-day explaining that the itinerary had changed again. Weather was threatening and they were going to be sailing away Monday afternoon. “How soon can you get here?” Cindy asked.

We hopped on the train and got there about a half hour before we had planned. We went onboard for drinks, complements of the hotel manager, had a wonderful visit with Cindy and Darius and two of their friends, and then were unceremoniously hustled off the ship (really, they were very gracious, but it was definitely a hustle) and we then watched the ship race out of port trying to stay ahead of the weather on its way to Cartagena.

It was a great glass of wine but it couldn’t compare to the lobster dinner I had been anticipating. Still, Darius and Cindy and their friends were worth it.

When San Geraldo and I were walking to the gym one afternoon last week, we spotted a 500-year-old ship in the harbour. He wondered aloud, jokingly, if it was the Santa Maria, while I wondered if it was the Niña (no votes for the Pinta).

It was enough that San Geraldo was walking to the gym, so I wasn’t going to tempt fate by asking him to take a sidetrip. Instead, I took a walk on my own a day later and discovered that the ship was a replica completed in 2011 of the Nao Victoria, the first ship to circumnavigate the globe. “Nao” means “carrack,” which was a three- or four-masted sailing ship developed in the 15th century.

The Victoria was built in the year 1512. The Spanish expedition, which began in 1519 and ended in 1522, was commanded by Portugal’s Ferdinand Magellan (who died during the voyage). They set off with five ships and a total crew of 265. Only the Victoria completed the journey, returning to Sevilla with 18 of its original 42-man crew returning (and its hold filled with exotic spices). Crew members scattered, mutinied, died, or were killed — either by each other or by native populations.

The replica was completed in 2011. For 3 euros, I was able to board and explore. Not a lot to see, really; it’s amazing how tiny these sea-going vessels used to be. But it was definitely worth the price.