We think we’ve got all the steps mapped out–and understood–for obtaining a residency (retirement) visa for Spain.  The Spanish Consulate in Los Angeles has an amazingly helpful website that clearly lists everything needed for every kind of visa.  So, we’re just going down the list and making sure we do everything we’re instructed to do… translated into Spanish… in duplicate (or triplicate)… and within three months of our departure date.

The list is daunting but, as I said, the LA Consulate has done a tremendous job of indicating every bit of info required along with detailed instructions.  I was going to repeat all the requirements here, but I don’t want to lose you! 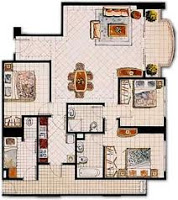 I’ll keep you posted as we go through our process.  Health insurance is required before we can apply, and traveler’s & repatriation insurance are also required for the first year.  Jerry is already getting the costs and making arrangements for all that.  We’ve also started looking online at apartments (a leased or owned residence is needed to apply for the visa).

Apartment/house-hunting is one of my favorite things to do.  I especially love when they provide floorplans (which they don’t do very often).  As a kid I used to love to get lost in the NY Times Sunday Magazine real estate floorplans.

For Spain, we’ve got our cheat sheets handy (mine in the form of an electronic “sticky note” on my desktop) translating all the rental terms from Spanish to English.

The most important rental term for Jerry: Calefacción…  Heat.  Jerry likes to be warm.

Surprisingly, calefacción is not all that common in what we’ve seen listed.  Jerry has been known to check out of hotels on business trips (and vacations) because the hotel didn’t allow him to control the heat in the room.  He hates those centrally controlled thermostats.  He has left a trail of space heaters around the country–all purchased when he couldn’t find a room with a guest-controlled heating system.  He even snuck out of his sister’s house in South Dakota one night to check into a hotel because he was cold.  Being the polite Midwesterner, he didn’t want her to know.  Of course, he got caught the next day.  She’s an early riser and discovered our rental car missing from the driveway at 6:30 a.m.  And, boy was he in trouble.  When he got back, his second-grade-teacher sister dragged him–almost by the ear–to the thermostat explaining, “You see how this works?  All you have to do when you’re cold is turn this little dial up and the… Oops…  I forgot to turn the thermostat back on last night.  Well, still, you could have just told me you were cold!”

He wasn’t off the hook.  But, complements of Jerry, they now have a space heater available for other thin-blooded guests. (In all fairness to our wonderful hosts, I slept with the window open that night.)

So, yes, we’ll definitely need calefacción.  And aire acondicionado, which I think you can translate on your own

And, speaking of calefacción, when I talked in an earlier post about the weather and how we settled on Southern Spain, I forgot until Jerry reminded me today that we started off in Barcelona.  We then discovered that winters, although not bad, are not as mild as we’d like.  We worked our way down to the spectacular city of Ronda, but it sits on top of a cliff at about 2,100 ft. and experiences a fairly cold winter.  THEN, we landed in Sevilla and, well, you now know the rest.

For our visa applications, we’ll also need clearance from the FBI stating “absence of police records.”  No worries there.  A clean bill of health for each of us.  Ditto.  Ditto.

So, that’s it for today.  I can’t say I’m heading off to Peet’s, since we’ve already been there.  Hot chai latte this time.  And yet another walnut chocolate chunk scone.  Maybe a little exercise on the side tomorrow before this week’s Thanksgiving binge begins.