WHERE TO EAT… AND WHERE NOT TO EAT… IN TRIANA

I mentioned recently that we purchased a pocket Spanish/English dictionary so we would be able to translate the Spanish menus and actually order a decent meal.  What we didn’t realize was that much of what was on the menu might not be in the dictionary.  Hence, meal disaster (or near-disaster) #2. 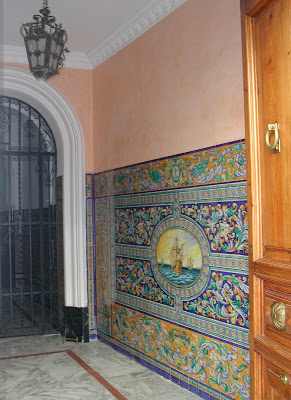 We took a walk today to and around the neighborhood of Triana.  It’s across the Guadalquivir River and we felt as if we had entered an entirely different city when we walked across the bridge.  Somewhat like walking across the Brooklyn Bridge from Manhattan to Brooklyn Heights… but not quite.  Triana is beautiful. It was the center of tile work and ceramic art and some of the details in the buildings are amazing.  Apartment building entries are works of art.

LUNCH NUMBER 1: EL FARO
The restaurant name was El Faro.  The location was stunning.  A rooftop restaurant at the foot of the bridge with a view up and down the river, and across the river to the cathedral, bullring, and everything else in the old center of Sevilla.  The sun was shining.  It was siesta time, around 2:30, so many restaurants were closed.  A perfect choice.  But then, being where it was should have been our first clue that it might be a tourist trap.  Well, we headed to the roof, selected our table with its wonderful view.  And the fun ended there.

Our waiter was not very pleasant.  We ordered drinks.  I asked for a “half” beer and Jerry asked for a small wine.  I had had a half beer before and it came in a normal glass, half full.  We didn’t specify a small “glass” of wine for Jerry.  The waiter arrived already opening a small “bottle” of wine.  Too late to take that back, we thought.  I don’t know what my half beer was half of, but it was enormous.  He asked if we wanted to start with some ham.  We thought, sure.  Then we started looking at the menu.  Jerry pulled out the dictionary and could find hardly a word of the menu within.  Fortunately, the service was so bad that the waiter never returned to take our order.  Meanwhile I had suggested to Jerry that we eat our “ham” when it finally arrived and then head someplace else for lunch.  Our ham arrived.  A plate of 16 slices of Iberian ham.  Not worth the ridiculously high price… and not even very good Iberian ham.  I finished my beer and was extremely tipsy.  Jerry left most of his wine behind… and was extremely tipsy.  After asking for the check and waiting an eternity, we left the restaurant miserably disappointed and feeling like a couple of fools.  Just remember that the restaurant sitting on the Triana side of the river, at the base of El Puente de Isabel II (the Isabel II Bridge), with the inviting rooftop terrace dining, is to be avoided at all costs.  Bad service, absurdly expensive, and our waiter at least likes to take advantage of tourists.  So, OK, our ignorance does not help in these situations, but we were definitely taken advantage of.  And the service was awful from both waiters for everyone on that rooftop.

We walked a bit around Triana, but were hungry, crabby, and needed to use the facilities.  So, we went back to our walking tour book and found a cafe along the route that was highly recommended.  We headed over to Casa Cuesta and our entire day improved.

We were greeted warmly by the bartender.  We sat down with the menu and took out our Spanish/English dictionary to once again discover it was useless as a menu translator (the primary reason we bought it).  Then our waiter arrived.  He smiled, put his hand on my shoulder, and in the most beautiful broken English we could ever hope to hear asked (with a smile in his voice), “Do you need some help?”

I spoke broken Spanish.  He spoke better broken English and we selected a great meal.  Well, he suggested a great meal and we agreed.  Patatas alinadas (potatoes in a deliciously seasoned dressing); entrecotte (perfectly seasoned and cooked beef with potatoes); fritera Andaluza (a selection of fried fish and seafood that Jerry enjoyed and I could have lived without).  Fish on the platter: hake, anchovies (very LARGE anchovies… as if small ones aren’t bad enough), sole, squid, clams.  I’m kind of picky when it comes to seafood, so that wasn’t the best choice for me, but it was impressive and I at least did enjoy the calamari (although there are so many sizes of squid in Southern Spain that they all have different names and I don’t think what I had was really considered calamari).

We finished off with the most amazing chocolate cake, which we rationally shared, and headed off happy, loved, and promising to return.

Casa Cuesta in Triana.  Get to Sevilla and make a point of checking this place out.  It just celebrated its 130th anniversary and it deserves to be there at least another 130 years.