Jerry and I have been together 29 years.

When did we start counting? For lack of a better idea, we started counting the moment we met, since we were hardly ever apart from that first day. It was the moment after Jerry squeezed my elbow as he walked by me during Sunday afternoon tea dance at Chaps in Copley Square, just across the alley from the Boston Public Library.

The moment after I turned to find myself lost in eyes the color of clouds and sky.

The moment after I decided I didn’t care if I had only minutes before seen him talking to my very recently ex (and only real) “boyfriend” — I was still going to go home with him.

We could have started counting three months later when we flew to San Juan, Puerto Rico, for what was supposed to be a romantic week-long escape from Boston’s cold, damp November winds. The week when we were asked at the guest house, Arcos Blancos, if we were lovers and answered in dissonant harmony, “No. Well, yes. But … Well …” and then smiled and, red-faced, shrugged our shoulders.
We could have stopped counting during that same trip to Puerto Rico.  When Jerry got cold feet — because it appeared we had fallen completely in love — and told me he thought it would be good for us to see other people.  Or when I very grudgingly agreed before he, back in Boston a few days later, changed his mind.  (And, for a few minutes at least, I wasn’t so sure anymore.)
An appropriate time to start counting might have been six months in, three months after we survived San Juan.  When I sat in Jerry’s tiny kitchen and told him he needed to either say good-bye to his checklist (the one that documented all his requirements for a perfect mate) or say good-bye to me.  And, without hesitation, he said good-bye to his checklist.  (I had met the height/weight requirement… and a few others.)

I suppose we could have started counting one month later — seven months after we first met. The day I gave up my urban-chic, completely renovated top floor in a South End brownstone, and watched the movers squeeze my solid-birch platform bed, Haitian-cotton love seat (purchased half price at Macy’s warehouse in NY), miscellaneous antique pieces, along with the boxes of audio cassettes, books, photo albums, dishes, clothing, furniture, and stuff amassed over a 27-year lifetime, into the last bit of remaining space in Jerry’s one-bedroom, smaller but urban-chic’er Beacon Hill row-house flat.

That first night spent in what had been my, but was now our, bed. A night Jerry spent snoring peacefully while I lay beside him. Sleepless. On my back. Eyes wide and staring dry and unblinking at the ceiling 12 feet above. Thinking, “I’ve given up my apartment. I have nowhere to go. What if this doesn’t work out? What have I done? What have I done? Holy crap. What have I done?”

But, we didn’t start counting then or in another eight months when we decided we couldn’t bear the thought of spending one more winter in raw, damp, windy Boston.  So quit our jobs, packed our things, and flew west to L.A. to discover that we had become — in addition to lovers — best friends. And that L.A. was definitely not where we belonged, so moved again seven months later, this time to Washington, D.C.

If, early on, we had been able to legally marry, we would have started counting on our wedding day. But, we weren’t. So, we didn’t.
If we had not each separately, years earlier, lost our religion, we might have considered having a commitment ceremony. If only to finally have a rite from which to count. But, by the time we began to seriously consider an “official” commitment, we had already been together more than 15 years. And we wondered what it would imply about our first 15 years together to suddenly say, “OK, now we’re committed.”
I didn’t consider beginning to count when, after we had spent only a year together, Jerry’s oldest friend, Joan, asked me why I loved him and — finally stopping to think about it — I realized it was because he was exceptional. And gifted.  And flawed.  And funny.  And abundantly human.  And that, when he let “his South Dakota” come out, he was the kindest person I had ever met.  And I would love him unconditionally for as long as I could imagine.
So, we did not start counting on the day we first referred to each other as “lover” because “boyfriend” sounded silly and “partner” was at the time considered politically cowardly. Nor the day we stopped referring to each other as “lover” and began saying “partner” — because “lover” didn’t say enough (we had both had at least a few lovers, after all) and “partner” had become acceptable.
I still find myself searching for the appropriate word for us. Partner confuses people, which was made especially apparent when we went to Norway in 1998 and met some cousins for the first time.  They thought Jerry was traveling with his business partner. After they were temporarily befuddled by the fact that I knew the names of every family member in their photo album, they finally realized we were “husbands.”  But I sadly cannot get comfortable referring to Jerry as my husband.
I’m still searching for that word that would define who we are as opposed to who we are not. Sometimes, I call Jerry my “spouse.” Some have called us “significant others.” Until we were legally married in Iowa in 2010, I would sometimes, half-jokingly refer to Jerry as my “domestic partner,” since, in California in 2003 we legally became at least that. Sometimes I say “life partner” or “the love of my life.” Too many imperfect choices for something the straight marrieds in our midst can say so simply. 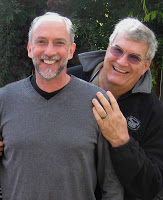 But, after all, why do we even have to be defined?
So, what I find myself saying is, “Jerry and I have been together 29 years.” And although I usually don’t stop to count the months, days, hours — and additional minutes — I am grateful for every single one.