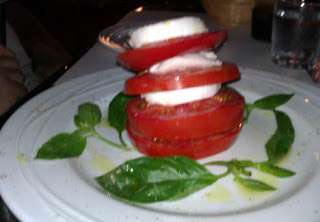 Jerry cooked dinner tonight.  (And I cleaned up.)  We had pasta and chicken in pesto sauce.  I was about to take a picture of our meal as we sat down for dinner when IKEA showed up with a delivery.  It only took a few minutes, but I sat back down, inhaled my food, and then remembered that I had wanted to take a picture.

If you need a food fix, I’ve included a slightly blurry shot of last night’s Leaning Tower of Caprese salad.  It was even better than it looked.  Plump, sweet tomato that tasted like it had been grown in South Dakota (where I’ve had the best tomatoes).  Mozarella unlike any I’ve ever had before.  And luscious mint that Jerry accidently swallowed whole, causing him to cough and sputter and requiring me to run inside and explain in surprisingly good hurried Spanish what he had done and that I needed some bread.  I’m so glad we had hierbabuena (mint) ice cream at Carmela in July.  That’s when I finally learned to remember the word “hierbabuena”; otherwise, who knows how things might have turned out last night.  Anyway, it was a pleasure to sit in our own dining room and eat a real meal tonight. (CORRECTION AFTER POST-TIME:  That’s, of course, basil.  The mint came from Jerry’s mojito!)

Oddly, we chose to have dinner at 7:30.  Like Americans.  We will definitely be sure to not make a habit of that.  (The IKEA delivery guys thought we were a bit odd; I think the early dining was the reason, but I could be wrong.) We’re going to head out later for a coffee or something just to stay on Spanish time.  But, breakfast and dinner at home today.  I’m proud of us.

We had gone back to IKEA this morning to buy what we hope will be the last pieces of furniture we’ll need.  Another bookcase, more storage and work surface for me, file cabinets, and some other items.  My mood then crashed and I spent a good part of the afternoon napping, reading sad world and US news on the Web, reading beautifully written and very moving blog posts by others that brought tears to my eyes.  Just feeling a little deficient today and wallowing in it.  Jerry’s allergies have been active and his ear has been clogged and bothering him for more than a week.  Nothing serious, but annoying and unpleasant for him and that saps his energy and enthusiasm.

I need to assemble furniture tomorrow and get organized.  That always helps.  It’s making me a little crazy that there are framed things sitting on the floor, leaning against walls, and without homes.  They’ve been here since Wednesday.  Why aren’t they all in their places?

Next comes joining the local gym.  That helps, too.  And then finding someplace to volunteer (but probably not working a telephone helpline).

16 thoughts on “Dinner at Home”