All the votes (mine) are in. The winner of the photo caption contest is… da da da da da da DAAAAAAA: The Owl Wood. San Geraldo thought he deserved to win on volume alone; but San Geraldo did not have a vote. The Owl Wood’s keepers did tell me it might be good for his morale (and also that they could take no responsibility for what he might do if he lost). So, here’s the photo with the winning caption.

I loved all the contributions. So, thanks to those of you who contributed and also commented. I wish I could send you all elegant gifts tacky souvenirs from Sevilla. But I’m just too cheap.

So, on their way some time next week from Sevilla, Spain, to The Owl Wood in England go two very rare (they’ve got to be one-of-a-kind at least) mementos of Sevilla. The first is a pair of castanets that I know The Owl Wood (a professional photographer) will keep with him at all times and will use skillfully at all future photo shoots.

The second valuable prize is a bola de nieve (snow globe) containing a flamenco dancer. The bottom of her dress forms the base for the snow globe (brilliantly clever). She could be hand-carved of rare Spanish marble or maybe even white jade. She could be. But she’s not.

The original photo — so creatively captioned by so many clever minds — was really from San Geraldo’s cousin’s wedding in 1966. That’s (from left to right) Aunt Lillian, Grandma Gudrun, and San Geraldo’s sister Linda (bridesmaid). 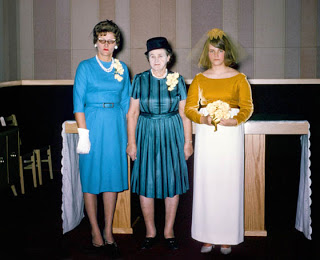 Thanks to Linda for kindly permitting me to use the photo (she’s got no shame) and to Lillian and Grandma for being such good sports, as well. (They’re no longer with us, but I’m sure they wouldn’t mind.) Lillian was a lot more fun than that photo suggests and San Geraldo and Alice (his mother) — and everyone else — adored Grandma. So, although I never met her, I do too.

And in case you’re wondering, Gudrun and Linda never did forgive Lillian for lauding it over them with that glove.

And, of course, special thanks to The Owl Wood for bringing so much laughter into this house!

19 thoughts on “And The Winner Is”