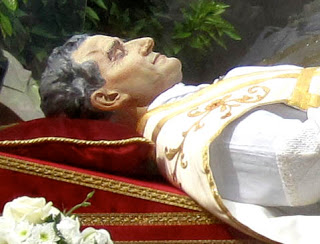 Yesterday presented another first for me in Sevilla. I was walking near the Cathedral with a couple of friends from Santa Barbara who were passing through town, giving them an overview of the city. As we were rounding the corner of the Archbishop’s Palace, I heard the drums of a marching band. It was somber and sounded like another religious procession. I rushed in the direction of the music with my friends close behind. We came upon a small procession. There was a float being hoisted by its invisible strongmen (hidden under the curtain). But, there was no seated or standing Virgin atop the float. As we neared it, we realized it was a silver and glass coffin. We immediately calmed ourselves respectfully, thinking we had come upon a funeral.

On closer inspection, I was relieved to see that beneath the glass was not a corpse, but a statue. We watched it pass having no idea — other than the Latin inscription I photographed — who it was or what the occasion.


Last night, I did some research and learned that what we had stumbled on was a very big deal. It was in honor of the 200th anniversary of Don Bosco’s birth. I’ll provide my own “dumbed-down” (for myself) version of what I read.
Don Bosco (Giovanni Melchiorre Bosco) was an Italian Roman Catholic priest who, in 1845, founded The Salesians, a charity organization to help the young and poor children of the industrial revolution. The “institute” is named for St. Francis de Sales, an early-modern bishop of Geneva. The corpse-like statue encased permanently under glass is a reliquary; apparently the right hand of Saint Don Bosco is encased within the chest cavity of this particular statue. This is the first time the reliquary has ever visited Sevilla. It’s making its rounds of the city this weekend and we just happened to be at the Cathedral at the right time. Later on, San Geraldo and I went for a walk and came upon another band preparing to march from the Plaza de San Lorenzo.

In 2006, Don Bosco’s hand was packed in a silver box and tied with a red ribbon before being placed inside the statue. Imagine finding that under the Christmas tree!

35 thoughts on “Carrying the Body Through the Streets”