I should have known something was wrong as I pointed out Fuengirola’s castle to San Geraldo. We were on the bus returning from the big shopping mall in town. The castle had at first been in the distance and was suddenly on the hill directly above us. I’ve walked to the castle a couple of times and knew it was further from home than the shopping mall. Even San Geraldo, who had never seen the castle, knew we were supposed to be heading away from it.

We had taken public transportation to the mall. Bus Line #4. For our return, without thinking, we hopped on Bus Line #1. The woman in front of us overheard our conversation. She turned around and said, “Not to worry. It goes this way first and then loops back around.” She got off the bus at the next stop.

The bus got on the highway and headed west along the coast for quite some distance. Then, we turned off the highway and into the foothills. And then we took a very winding road. Fortunately, we only wound around a couple of minutes — just long enough for us to both think about the motion-sickness pill San Geraldo would have taken had we known we were going on a bus tour. We returned to the highway and headed back along the coast to Fuengirola. It turns out we weren’t much more than 5 km (3 miles) from town. We now know we can take either Bus Line #4 or #1 to the shopping mall. And we got to ride on “new road” (for us). Our great adventure. 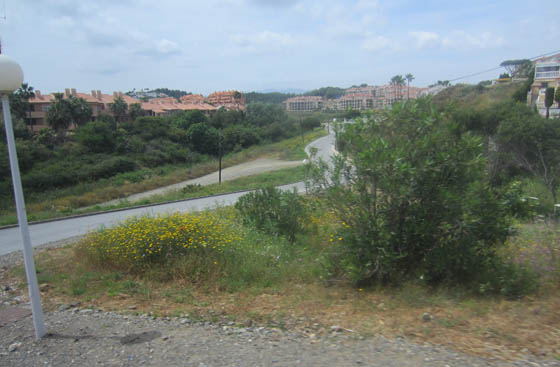