This morning while enjoying my coffee at Cafe Manila (yes, admittedly, I enjoyed it), I was looking at yesterday’s blog post and I noticed one photo was missing. I had remembered to grab it from Google Maps but had forgotten to include it in the post.

We spent two years living in Irvine, California, between (chronologically) Las Vegas and Sevilla. Irvine is a master-planned city. Completely landscaped. Pristine. Perfectly manicured. Everything carefully thought-out … and controlled. Many people like it. My take? “The Stepford Wives” comes to mind.

Who Could Possibly Remain Miserable?
Sharing my pseudo-misery with you yesterday helped me overcome it quite a bit. So, thanks! I hope I didn’t pass it on. Coffee at Cafe Manila this morning helped some more. As Tynan expressed it, there were two “Canadans” (as opposed to Canadians) having breakfast. We haven’t looked up the origins of the term Canadian (although Tynan suggested we do so), but he did make us wonder why we aren’t called the Americanians. After that highly intellectual and thought-provoking conversation (for which we can always count on Tynan), San Geraldo headed off to his Spanish class. (What is this world coming to? First he starts losing weight. Then he starts formally studying Spanish.) I came home to the cats and they let me share their bed. It’s not so bad. 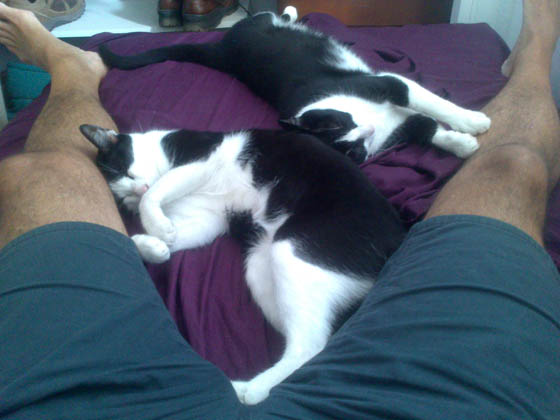 16 thoughts on “Misery Loves Company and Another Google(d) Home”