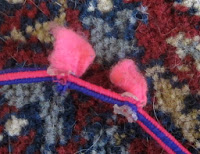 Dudo and Moose are quickly on their way through their package of toy mice. I’ve never played so much in my life. When I wake up in the morning (usually with the cats’ help), Dudo is sitting on my bed with a mouse at his feet or in his mouth, waiting for me to play. When I sit at my desk during the day, he sits on the den bed mewing at me, a mouse within reach.

Although Moose has been enjoying play-time with me and these mice, as well, he still manages to entertain himself throughout the day. Not Dudo. He needs and expects (and, OK, usually gets) my participation. My plan is to play with him until he tires or gets bored, which usually takes a half hour or less. Today, more than eleven hours later, and he’s still nagging me to play with him. And guess who’s winning. (My lips tell him “no, no” but there’s “yes, yes” in my eyes.)

It started at 8 a.m. and at 7:30 p.m. he’s still following me around the house dragging an artificial mouse carcass along with him. I played with him for two solid hours this afternoon and finally decided I needed a siesta. He followed me into the bedroom, the remnants of Mouse #2 in his mouth.

The original mice are simply hard plastic “bodies” wrapped with duotone elastic cord, with felt eyes, ears, and nose attached. But after a few minutes with Dudo and Moose they no longer bear any resemblance to mice. Mouse #2 is now just some elastic cord … with ears.

They both like to chew the crunchy plastic for a bit until they get the cord completely undone. The sound of crunching plastic is a bit disturbing. But, I’m grateful it’s not actual bone (click here to learn what fellow-blogger Knatolee listens to).

And, in case you’re wondering, Dudo is about to drive me crazy!!! I have definitely got to get out of the house. But, I’ll admit, I love every [other] minute of it.